To avoid further negative campaigning, Democrats split over O’bama and Swillary looked to India for guidance on how to proceed….. 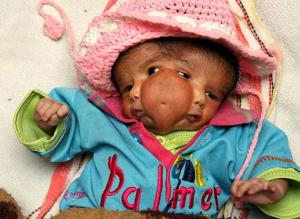 An Indian baby born with two faces is doing wellone month after her birth, doctors have said.

And while she may seem like an oddity to some, her proud parents think she is simply a God reincarnated. — Daily Mail

“This is what we need to replicate!” a spokesman for the Democraic National Committee exclaimed. “We simply graft Obama and Clinton’s faces on one of our neutered drones, and the whole primary issue is resolved overnight! It’s win-win for everyone!”

News of the freak birth instantly became the talk of both campaign committees. Representatives commented on the obvious appeal — compromise, vote-getting capacity, and eerie resemblance to Condoleeza Rice.

Howard Dean, chairman of the DNC whose lack of leadership during the hotly contested campaign between Hitlery and Al-Obama has infuriated Dems across the board, broke his silence to heartily endorse the idea. “It’s the perfect solution — it bypasses the need to make a decision that runs the risk of offending anybody,” he bubbled happily. “That’s exactly what the Party stands for — offending nobody, even at the risk of displaying leadership.”

On the other side of town, John McCain’s handlers noted they had been considering alternative circus freaks ‘way before this development. “Six months ago, we explored grafting Donald Rumsfeld’s ass and Ann Coulter’s Adam’s Apple,” one noted. “Trouble is, there’d be no way of controlling it, and besides, we couldn’t tell the difference.”