After Ana Iris Perez-Hernandez was run over and killed in front of her young son, Miami police needed to find the driver. And her pasta pointed the way.

Ana, 25, had been carrying her homemade spaghetti in tomato sauce in a plastic container when she stepped into the street and a Toyota Corolla plowed into her, launching the lunch into the air.

”It was underneath the grill and there were still pieces on the bottom right part of the windshield,” Rubio said. “It told me that at least, the vehicle was possibly involved in the accident — there aren’t too many vehicles with spaghetti on them.” Miami Hurled 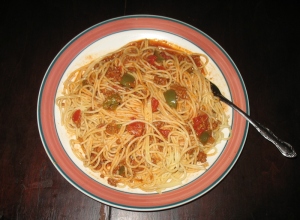 “Every vehicle in my old neighborhood had spaghetti or some kind of pasta on it,” Guido remarks, reading over my shoulder. “Garlic, too. And red wine. This wouldn’t have counted as evidence of anything more than South Philly residency. Or a pizza delivery gone bad.”

How about the cracked windshield and dented bumper?

“In South Philly? Get serious. That’s every other car.”

Yeah, okay. But they’re pretty sure they got their man. The pasta did him in. So I guess you could say it serves him right.  Forked over.

This entry was posted in News From the Nation's Dicktip, Uncategorized. Bookmark the permalink.

6 Responses to Dimed By Noodles