The fat of the land is now buried in it. 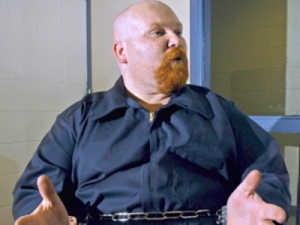 There were no immediate reports of difficulties finding suitable veins to deliver the deadly chemicals, a problem that has delayed previous executions in the state. Cooey’s attorneys had argued that his weight problem would make it difficult for prison staff to access a vein. — msnbc.com

MSNBC dispatched a reporter to the Gates of Hell for a post-mortem interview, but received no word back yet.  “This being an election year, there’s bound to be some processing backups,” a spokesman explained.

Meanwhile, here on earth, a judge steps in to protect the rights of god:

Ernie Chambers, a Nebraska state senator, sought a “permanent injunction” that ordered God to stop causing “widespread death, destruction and terrorisation of millions upon millions of the Earth’s inhabitants”.

It identified the defendant, said to be “also known by various aliases, titles, names, designations” as “present in all places at the same time” and “the admitted perpetrator of the deleterious acts complained of herein”.

The suit also claimed the “defendant” has “manifested neither compassion nor remorse, proclaiming that Defendant ‘will laugh’ when calamity comes”.

But Marlon Polk, Douglas County district court judge, ruled that under state law, a plaintiff must have access to the defendant and be able to serve papers on him or her for a lawsuit to go ahead.

“Given that this court finds that there can never be service effectuated on the named defendant this action will be dismissed with prejudice,” the judge wrote.–telegraph.co.uk

There are more than a few names by which Sen Chambers is known in his home state, too, most of which never appear in family newspapers.

I wonder if Chambers was suing for monetary damages, and if so, how much, and how he anticipated collecting a judgment.  Most of all, what was he planning to do with the money?

Anyway, he has 30 days to appeal.  Wonder how long he has to live.