The problem with logic is, it has nothing to do with common sense.

In fact, logic is to common sense what the AntiChrist is to the Pope’s libido.

Your Honor, I offer as evidence the poster depicted here, spotted in the foyer of the Moonlight Diner (Oakwood Plaza).  Any bone brain with a pair of firing synapses to rub together understands what this means.  It points out a 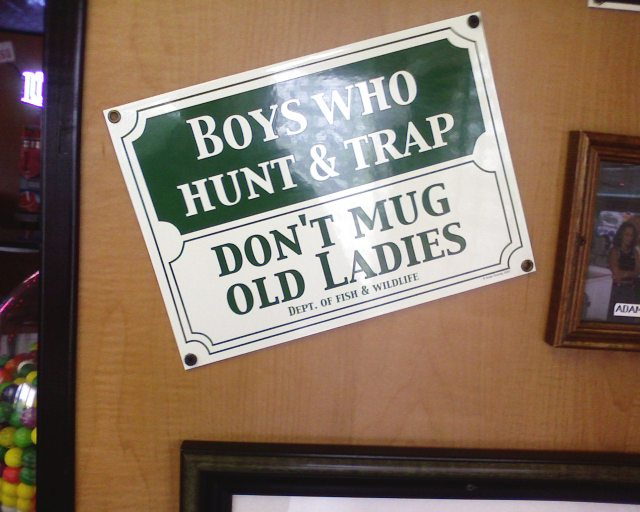 commonsense truth: introduce young men to the pleasures of assassinating wild animals, in some cases (like trapping) incapacitating them to the point where they’ll chew off their own forelegs in an attempt to escape — and the ecstatic groin engorgement they experience will overwhelm them with pleasure, and they’ll forget about mugging.

So, they learn early on: Manly killing and slow torture trump criminal violence any time.  Gunplay and dead animals get you laid, while mugging doesn’t even get you wealthy.

But those of trained in uncompromising logic read this poster another way entirely.  To us, it says “Boys who hunt and trap don’t mug old ladies, they hunt and trap them.”  Read it again.  See?  And see how just wrong that is?

This is why I submit to the Court that logic has no place in the Real World, and why pointy-headed literalists like myself are better off not hunting, trapping, or mugging old ladies, but locked in cages with dusty volumes of Kant and Schopenhauer, and perhaps, when behaving, strong beer and cold tequila.

You Honor, old ladies and feral animals appreciate your concern.

5 Responses to Sharpen Your Axiom