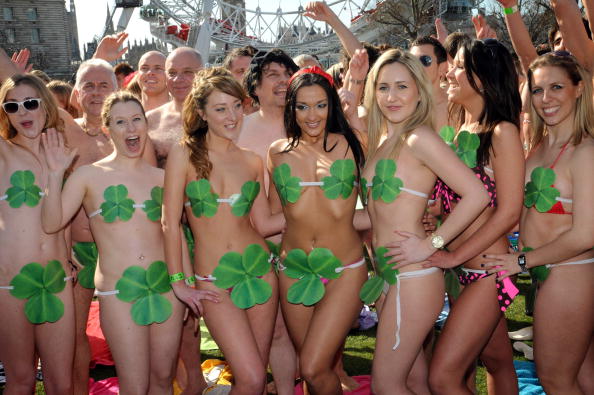 As a professional fundraiser working during the single worst economy I’ve ever confronted, I rack my grey matter daily thinking of ways to encourage contributions.  When I stumbled across this one, all I could do was groan in agonized jealousy.

About 400 people have stripped off in London in order to win free flights in a stunt organised by Irish carrier Aer Lingus.  The airline had promised two free flights to people willing to strip off at Jubilee Gardens, in the shadow of the London Eye. The participants were given ‘shamrocks’ to protect their modesty.

The airline had hoped to attract 1000 people for the strip-off, but Metropolitan Police told The Daily Telegraph that less than half that number had turned out, despite the unseasonably warm weather.

A spokesman for the airline said some participants had stripped off completely, despite warnings from the police that they would be fined for doing so.

The airline’s stunt was to promote new routes from Gatwick Airport to Europe, tying in with it’s “no hidden extras” tagline.   Stuff.com.nz

Leave it to the Irish.  Those Aer Lingus executives sure are cunning.  Hee yuk.

While there are compelling reason why it wouldn’t work where I am now, the idea is just brilliant nonetheless.  A strip-off to raise money, where aspiring models, Hooters Girls, pole dancers,  and garden variety exhibitionists ask their friends and colleagues to put up cash as sponsors, all proceeds to go to the cause, would certainly work in south Florida.

Sure beats writing proposals and strapping on the kneepads in corporate board rooms.

Happy Friday, everyone.  And god bless the Irish every day, all year long.