Shut Up and Eat

Marilyn Wann is an author and weight diversity speaker in Northern California who has a message for anyone making judgments about her health based on her large physique. “The only thing anyone can accurately diagnose by looking at a fat person is their own level of stereotype and prejudice about fat,” said Ms. Wann, a 43-year-old San Franciscan whose motto in life is also the title of her book: “Fat! So?”

“Basically,” Ms. Wann continued, “we want to be treated with respect the same as everyone else.”  — NYTimes

Fat is the new smoking.  And like anti-tobacco measures, now there are movements to make fat asses pay for their appetites: they’re “over-consumers of health care,” and inflate costs for those of us capable of pushing back from a dinner table before devouring everything on the plates including the patterns.

Dangers of the Garlic Diet

Extra weight brings with it an increased risk of chronic disease, medical experts say, and heavier people tend to have medical costs that are substantially higher than their leaner counterparts. As a result, Congress is considering proposals in the effort to overhaul health care that would make it easier for employers to use financial rewards or penalties to promote healthy behavior by employees, like weight loss.

How’s that for respect, Ms. Wann?  It’s about all I can muster for somebody who calls herself a “weight diversity speaker.”

But she’s small potatoes (heh) compared to these two:

Peggy Howell, the public relations director for the National Association to Advance Fat Acceptance, said she had been on the phone delivering her group’s message and answering more news media calls this year than ever before….The message is simple, she said: “We believe that fat people can eat healthy food and add movement to their lives and be healthy. And healthy should be the goal, not thin.”

The “National Association to Advance Fat Acceptance.”  These are people who, unwilling or unable to shed excess poundage, go on the offense and cry discrimination.  Why haven’t they appeared on Orka Winfrey yet?  Seems she’d welcome them with open, flabby arms.

And now my favorite:

“I get so angry when I feel people pushing a weight-loss agenda,” said Linda Bacon, a nutrition professor at City College of San Francisco and author of “Health at Every Size,” a book published last year whose title has become the rallying cry of the fat pride community. “What we’re doing in public health care policy is harmful. We give a direct and clear message that there’s something wrong with being fat.”

That’s right, her name is Bacon and she represents the “fat pride community.”  If I could make up crap like this, people might actually read my blog.

Not every porker is unhealthy, just as not every slender body is healthy.  Not every smoker develops cancer or heart disease.  Not every sun freak grows skin cancer.  Not every newborn of an alcoholic suffers brain defects.  That’s not the point, and says nothing at all about the dangers of the practices and conditions. 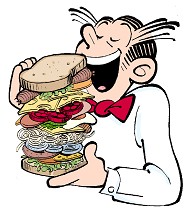 But what cracks my aggots is the way these larded whiners wrap their avoirdupoidically challenged asses in the diapers of victimhood, and react by blaming the rest of the world for our insensitivity and unfounded bias.  Don’t talk while you’re eating, dammit.   Eat up and shut up!  Enjoy your food if that makes you happy, don’t whine about your waistline!  You hear people like me complaining just because our horns and tails make it tough to buy hats and pants?

I recommend we have them slaughtered, butchered, and pulped, then force-fed to bulimics.  Oh, excuse me: “the voluntarily nutritionally challenged.”

12 Responses to Shut Up and Eat