Spawn of Bin Laden in Red White and Blue

If you missed the latest, it seems that in the wake of the vote approving the Health Care Reform Bill, Congressional representatives who voted Yea have received assorted death threats and endured acts of vandalism against their offices and homes.

Representative Steny H. Hoyer, Democrat of Maryland and the majority leader, said at least 10 House members had raised concerns about their personal security since the climactic votes on Sunday…..At least two Congressional district offices were 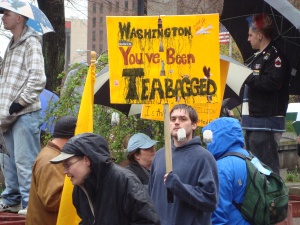 Ms. Slaughter also reported that a brick was thrown through a window of her office in Niagara Falls, and Representative Gabrielle Giffords, Democrat of Arizona, said on Monday that her Tucson office was vandalized after the vote… authorities in Virginia were investigating a cut propane line to an outdoor grill at the home of a brother of Representative Tom Perriello of Virginia, after the address was mistakenly listed on a Tea Party Web site as the residence of the congressman. Representative Bart Stupak….reported receiving threatening phone calls…..Representative James E. Clyburn of South Carolina, the highest-ranking black lawmaker in the House, said he received an anonymous fax showing the image of a noose.

Great fun, and even better statesmanship.  This after the racial and homophobic taunts by the mob outside the House earlier in the week.  So much for the loyal opposition.  So much for the conservatives’ respect for law and order, individual rights, and respect for the integrity of the American system.  True patriotism.  The noble populist movement in full bloom.

The outraged response of mainstream Republicans has been swift and unwavering.

“It is understandable that Democrats would want this opposition to their power grab to be reduced to absurdity, a spasm of racism and homophobia instead of organized conservative idealism,” Brent Bozell, the head of the Media Research Center, argued in a column posted online at GOP USA. “It is deplorable that our national news media went into overdrive on this Democrat public-relations initiative.”

See?  It never happened.  It’s a liberal media conspiracy, probably engineered by Rahm Emanuel using George Soros’ money.  Don’t be fooled, Teabaggers!  And for god’s sake, hang onto your guns because that’s the next step in their communist takeover plot.

Man oh man.  If you ever entertained a scrap of respect for these raging imbeciles, this should be enough to open your eyes forever.  But it isn’t, is it?  It never is, and never will be.