Say It With Lactate

Something to chew on as you look around the workplace at your colleagues…….

[W]omen and men in Saudi Arabia must be careful not to mingle, as the insanely strict Islamic law bans mixing between the sexes who are not related.  Recently, the Saudis have issued a fatwa that forces women who come into contact with unrelated men on a regular basis to breastfeed them so that they can be considered “relatives” and not potential lovers.  The strangest part is, this isn’t the actual issue at hand.  The issue is, how do the men get the milk?

According to the Gulf News, Sheikh Al Obeikan, a consultant to the Ministry of Justice and an adviser to the royal court stated, “the man should take the milk, but not directly from the breast of the woman. He should drink it and then becomes a relative of the family, a fact that allows him to come in contact with the woman without breaking Islam’s rules about mixing.”

This fatwa applies to men who regularly come into contact with the same woman, or men who live in the same house with a woman. The woman has to pump her breast milk into a glass and give it to the unrelated male.  – Opensalon.com 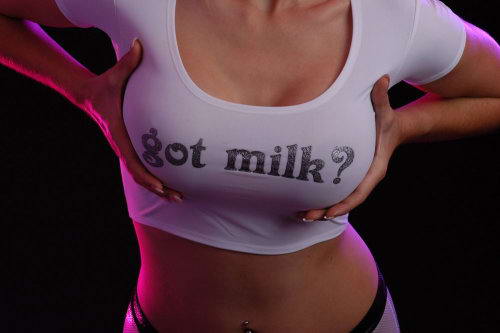 Another “Make Mine Vanilla” moment – that’s twice in two days around here.   (Only yesterday I said butter almond.)

Instead of offering this preposterous solution to a problem that isn’t there to begin with, wouldn’t it be more, I don’t know,  practical to somehow declare the Islamic law that gives rise to it null and void, or at least inoperative?  But that’s just not how religious leaders go about it.

So  guys, I guess  to keep the faith, you turn this into a ritual.  Every day at 10:30 the crew gathers at the Milk Bar for a Lactate Break.  Spend 15 minutes sampling bagels and pastries while sipping your colleagues’ expressed breast milk, talking about last night’s ball game and the stock market, whatever.   Get to know the folks you work with by the taste of their glands’ secretions.

Sounds like a splendid opportunity for networking sessions, too.

Like most men with a pair of hormones to rub together, I’ve lusted after colleagues over the years, sometimes acting on it (ALWAYS ALWAYS ALWAYS a bad idea).   I suspect this practice would put an end to that, but not for the holy reasons cited by clerics.  It’s just that sucking colleagues’ breast milk through a sippy cup sounds so udderly  (heh) perverse I’d probably be turned off forever.  No wonder goats are so popular over there.

Of course, if direct extraction is permitted, I might reconsider.

9 Responses to Say It With Lactate