Posted on September 8, 2010 by squathole

If I understand it correctly, the San Francisco Metropolitan Transportation Agency has a policy that bans depictions of guns in advertising on its property.  So to comply with this policy for the upcoming movie “The Other Guys,” posters showing guns in the hands of the two actors were altered to show pepper spray, badges, or just bare hands. 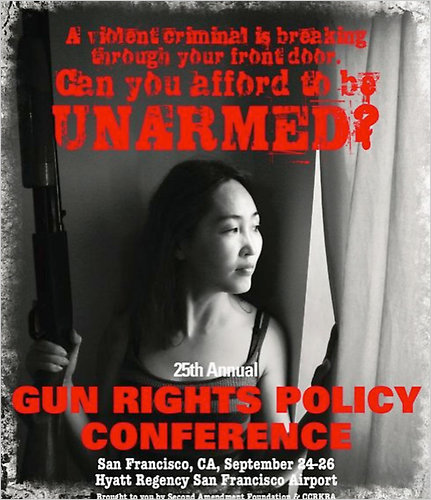 When the Second Amendment Foundation got wind of this, it authorized $10,000 to produce bus stop posters featuring a woman armed with a shotgun, promoting its late September conference in San Francisco.  But despite its policy, Metro has accepted the posters, saying that the recent Supreme Court decision on gun ownership (6/28/10; McDonald v. Chicago) has “altered the legal landscape.”

This raises whole nests of questions, doesn’t it?  Starting with, What kind of idiotic policy is it to eliminate depictions of guns on posters?  Does this include posters encouraging military recruitment?  And why just guns?  Why not other deadly weapons, like knives, swords, vials of anthrax, thumbscrews, Lite Beer, and photographs of Nancy Pelosi?

Of course, if we already allow prohibitions on items like tobacco products and bare asses, it’s easy to keep belly-flopping down the slippery slope.  What’s after guns – beer, wine, and booze?  Ads for planned parenthood clinics?  Prayer meetings at mosques?

I believe we’re looking at commercial speech here, to which historically and legally there are greater restrictions imposed.  In that case, of what relevance is the Supreme Court decision?  Whether or not the Second Amendment applies to states and municipalities, doesn’t the transportation authority have the right to regulate its own commercial enterprise?  If there is a Constitutional issue here,  is it a First or Second Amendment matter?  Or both?  Or neither?

It’s between ludicrous and infuriating to prohibit depictions of guns in movie posters, a wonderful example of over-protective authority fixing what ain’t broke because it can’t fix what is – violence in the streets, schools, and homes of its citizens. You can argue all you like gun nuts that yes, guns do in fact kill people, but does anybody other than an elected official believe that pictures of guns kill people?

We’ll keep an eye on this one to see how it plays out.  As for the movie, I plan to miss it.  As well as the conference.