Give the People What They Want

….or, “Mister President, tear down this war!” 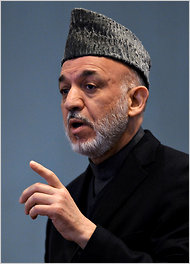 In an emotional speech on Saturday in the eastern city of Asadabad, in Kunar Province, Afghan president [Hamid Karzai] told relatives and neighbors of civilian victims that he sympathized with their plight. “With great honor and with great respect, and humbly rather than with arrogance, I request that NATO and America should stop these operations on our soil,” he said. “This war is not on our soil. If this war is against terror, then this war is not here, terror is not here.”

Mr. Karzai’s remarks were made at a memorial service for the victims, in the presence of local officials as well as the second highest ranking American general in Afghanistan, David M. Rodriguez. “Our demand is that this war should be stopped,” Mr. Karzai said. “This is the voice of Afghanistan.” – NYTimes

2 Responses to Give the People What They Want