Going to the Dogs

Thanks to my post yesterday about cats, I’ve received some very impressive hate mail from dog people who have threatened both violence and litigation.  Who knew?  So today we’re going to the dogs….. 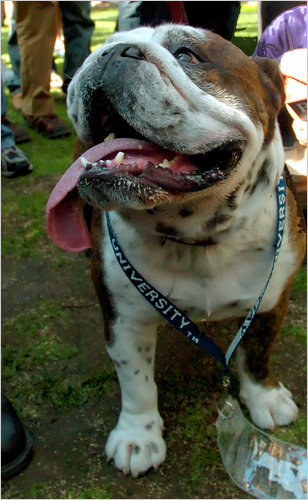 Yale Law School..is embarking on a pilot program next week in which students can check out a “therapy dog” named Monty along with the library’s collection of more than one million books…..While the law school is saying little so far about its dog-lending program, it has distributed a memo to students with the basics: that Monty will be available at the circulation desk to stressed-out students for 30 minutes at a time beginning Monday, for a three-day trial run.

“It is well documented that visits from therapy dogs have resulted in increased happiness, calmness and overall emotional well-being,” Blair Kauffman, the law librarian, wrote in an e-mail to students. — NYTimes

So you’re a Yale student and you’re going to emotional pieces trying to (a) learn everything in record time, (b) eat, sleep, stay relatively clean, and do laundry, (c) get laid, and (d) stay sane.  Well, if you know anybody (including yourself) who attended Yale, you know that’s essentially impossible.  Enter Monty, in 30-minute increments.

Monty can’t help you with items (a) through (c) above — in fact, unlike Florida, in civilized Connecticut, there are laws against having sex with dogs (c), and Monty probably wouldn’t make a good study-buddy (a) or meal (b).  But there are studies about the soothing effect canines exert on stressed-out humans, so Yale, well aware of their students’ emotional turmoil, has decided to give it a try.

Let me state at this point that while I don’t especially care for dogs, I feel sorry for Monty.  I know some Yale graduates, and I don’t mean privileged-in shitheels like former president Monkey Boy or his nerdy preppy daddy.  I’m talking about the brilliant psycho species who are ‘way more likely to attack Monty than vice-versa.  Man Bites Dog.

I’m also a bit skeptical (imagine) because I don’t find dogs a particularly soothing presence.  We’re on our second one, now, and she’s as relaxed as a coiled spring, a bundle of nervous energy, liable to start with her ear-splitting bark at the slightest provocation, day or night.  She has attacked the front door daily for going on 8 years whenever she hears the mailman.  Those 5-times daily power interruptions we get every day in rainy season — puh-leeze don’t get me started on Florida Plunder and Loot yet! —  send her into whining, tail-chasing conniptions.  She’s always lunging at objects only she can detect, snapping and wagging her tail like a drunken lunatic.  Keep in mind she’s about 65 pounds of pure Belgian shepherd style muscle.  This ain’t no peeing little Yorky.

I treasure any 30-minute interval she’s NOT around.

Maybe Monty is deaf and blind.  In any event, he’s actually trained to tolerate and provide comfort to emotionally distraught humans (in 30-minute sessions, anyway).  Presumably there’s no extra charge for fleas, dog hair, or drool.

So good luck, Monty, and good luck Yalies.  Between you you’ve found yet another use for libraries at a time when they’re being squeezed out of existence by a combination of   budget cuts and new technology.  Besides, if libraries lending dogs for 30-minute sessions are the next phase of our cultural evolution, can sex partners be far behind?

11 Responses to Going to the Dogs