Thanks to Thor for this one.

Do atheists have better sex? Yes. According to science, that is — and more specifically, according to the recently released “Sex and Secularism” study.

Atheists and other non-believers, as a whole, experience a lot more satisfaction in their sex lives than they did when they were believers. They feel much less guilt about their sex lives and their sexuality. The sexual guilt instilled by so many religions tends to fade, and indeed disappear, when people leave religion — much more thoroughly than you might expect. And according to the respondents of this study, non-believers give significantly better sex education to their kids than believers do.  — alternet.oog

Now the study doesn’t conclude that atheists do it better, it just says they like it more.  But think about that — if you like it more, you’ll do better at it, right?  Of course.  Like, um, golf!  Or other activities involving balls, shafts, holes, and putz. 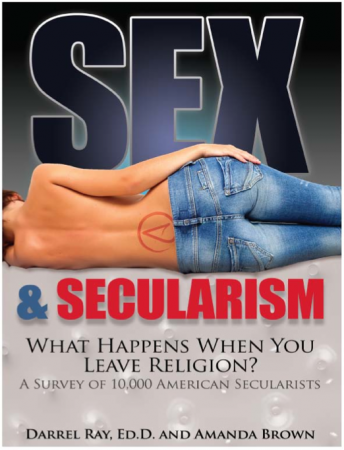 As a practicing atheist of long standing, I tried to place this study’s conclusions into my own experience.  The trouble is, I can’t remember whether I dumped my faith before or after I surrendered my virginity, so I can’t remember if sex was better afterwards. (For purposes of this scientific inquiry, let’s leave out sex via wrist aerobics.)

But I also remember that many of my partners claimed to have deep religious convictions.  Even the married ones.  And they seemed to enjoy it just fine, at least as much as I did, and I was absolutely obsessed with it.  Still am.  Just writing this turns me on.  [Insert TMI break here.]

One devout soul even asked me if I felt like a hypocrite hollering out OH GOD at appropriate moments.  What was I supposed to say?  OH SECULAR HUMANISM?  And then there’s the dyslexic believer who moaned HO DOG HO DOG HO DOG……

(You may address your sympathy cards to Guido at this blog address.)

So the findings of this study surprise me.  My own experiences just never led me to conclude there is any link between sexual enjoyment and religious conviction, or the lack thereof.  Maybe my sampling lacks variety — I never had sex with nuns, Amish women, 7th Day Adventists, or rabbinical students, for example.  Evidently my partners shed their guilt along with their training bras.

Can’t wait to hear from Mumblety Peg on THIS one.

5 Responses to Believe This