Be It Ever So Humble

Late afternoon on Memorial Day I drop in on the Liquor and Rubber Balls Sports Emporium and Aquaculture Supply Depot to see what there is to see at the end of a holiday weekend.  When I arrive, Don Tequila, tending bar again, is sliding a 20-oz draft to Vera Lu Senz, the former Chicago sportswriter, whom I join.  Don doesn’t hesitate — he spots me and pulls a 20 for me, too.  Ice cold Grolsch on tap.  Allah be praised.

Don sports what looks like a fresh razor slash from his eyebrow to his jawbone.

“Yeah,” he says.  “A peace rally broke out last night in the bar.  Must’ve been in honor of us veterans on Memorial Day.”

“Navy Seals,” he says.  “Eight years before I couldn’t stand it any more.”

What kind of missions did you work? 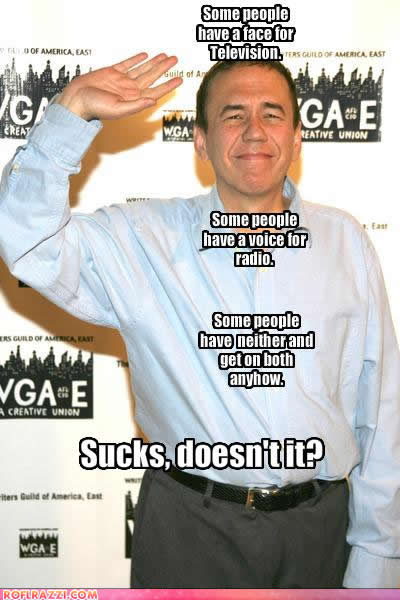 Don looks at me thoughtfully.  “I could tell you all about it,” he says, “but I’d have to kill you afterwards.”

Sheesh.  And these are my friends.

I show Lu and Don this article from the New York Times Book Review — seems that obnoxious twerp Gilbert Gottfried has a book out called Rubber Balls and Liquor.  Despite the name, it has nothing to do with this Hollywood drinking establishment.   Certainly, though, it’s based on the same joke.

“The name of a bar might get you inside it,” observes Lu, who prides herself on having been inside bars in every American city with a major or minor league baseball team.  “But what gets you back and keep you coming has nothing to do with it.”

Lu — you don’t hang out at LRB’s because of the name?  What then?  Me?  Don?  The flat screen teevees?  The collection of serious dykes in this place?

Lu gives me that heavy lidded look.  “Yes,” she says.

Why does anybody find one special bar to hang out at, anyway?  LRBs is in my neighborhood, there’s an amazing selection of draught beers including Grolsch which I could happily live on even if they didn’t also have Bass, Guinness, Harp, KW Lager, Anchor Steam, Dortmunder Ritterbrau, Old Peculier, etc., and there’s something comforting about drinking in a lesbian sports bar where the bartender/bouncer (and maybe the owner — he never says) is a growling 6’10” monster who can bend horseshoes with his bare hands.

Only way I could be happier is if one day I walked in and found Carlsberg Elephant on tap.  I mention this to Lu, who laughs.  “The only Elephant in the room is Don,” she says.  “That should be enough, right?”

This entry was posted in The Adventures of Don Tequila. Bookmark the permalink.

4 Responses to Be It Ever So Humble