Nobody  is reading my blog these hot summer days, a scant 2 weeks (6.16) since my post, “Torture Chamber of Commerce,” got 938 hits.  So it’s time to go basement again.

An Ohio woman attempted to fight off police trying to remove her from her car by spraying them with her breast milk, authorities said. 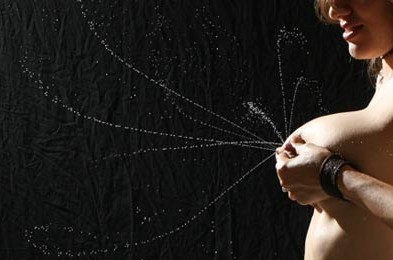 tephanie Robinette got into a fight with her husband while attending a wedding at the Bridgewater Banquet & Conference Center in the city of Delaware on Saturday, WBNS 10 News reported.  Her husband told police his 30-year-old wife struck him several times, then locked herself in their vehicle.

“When deputies attempted to remove Robinette from the vehicle, she advised the deputies that she was a breast-feeding mother,” said Sheriff Walter L. Davis III.  As deputies went to restrain her, he said, Robinette “proceeded to remove her right breast from her dress and began spraying deputies and the vehicle with her breast milk.”

“This is a prime example of how alcohol can make individuals do things they would not normally do,” Davis said.  — NY Daily News

I disagree with Sheriff Davis’s assessment.  This is exactly what any woman would do when backed into a corner, given her limited options.  “Back off coppers, or I’ll squirt!”  Hell, I’d do it myself if I could.

Besdies, isn’t there a constitutional right to spray breast milk unless it’s in a crowded theater or something?

As for the infant, deprived of what might have been his first taste of alcohol (albeit it a mixed cocktail), well, she owes its baby-smooth butt a drink.  I know there are some who find it abhorrent that a lactating mom would drink at all, but if there’s anybody who deserves one, it’s a female human being relegated to lower status on the food chain.  Drink up, mom.  What’s a bit of brain damage to a baby’s future, anyway?  Look at Glenn Beck.

I only wish we had video of the cops getting hosed.

6 Responses to The Milky Way