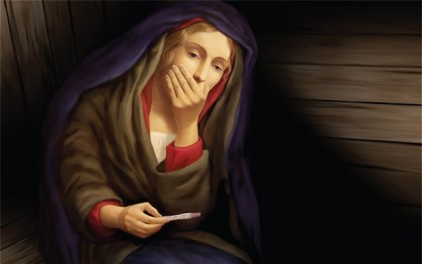 One of the best things about the Christmas season is the number and variety of news items about self-proclaimed Christians going seasonally post-toasties.

It seems to be a world-wide phenomenon, unrelated to weather conditions, drinking water, or whatever choad happens to be in office at any given moment, which suggests the underlying motive is purely spiritual, a result of the holiday itself.

This one from down under:

A scissor-wielding protester has destroyed a controversial billboard of the Virgin Mary, just days after it went up outside a New Zealand church.

Arthur Skinner, a member of an organisation calling itself the Catholic Action Group, who described the Renaissance-style picture as “satanic”, was photographed attacking it.

“Yes, it is vandalism,” Mr Skinner proclaimed proudly outside the church.  “I’m guilty. If they want to arrest me, be my guest.”   — Telegraph.co.uk

(I had to be told that the item in the Virgin’s hand is a device from a pregnancy test indicating she’d been knocked up.  I’ve never seen one in action.  Back when I was routinely having sex with women who were in danger of becoming pregnant, we had to wait a few months to find out how much trouble we were in.  How quaint.)

I’m also thinking, why is she covering her mouth?  That might have been the problem to begin with.

Not being a Christian myself, the idea of virgin birth always sounded kind of bogus to me anyhow.  Imagine, if you like, how it sounded to Joseph — and what was he holding out for, anyway, that he hasn’t popped her cherry; do we want to know?

I will leave to those who have skin in the game the determination about the picture’s “Satanic” designation.  Clearly that’s not for me to say: I don’t know, and I don’t care.  And I doubt (and hope) that anybody who DOES care, cares what I think, anyway.

But I rather deplore the act of vandalism Mr. Skinner boasts about.  Destroying art out of religious convictions is a genuinely bad idea, even if the art itself is bad.  Silencing free expression is another decidedly rotten activity.  Even if you want to credit the poor blighter with a pure intention — and I sure don’t — when you toss in the inevitable backlash such dim-bulb destruction will inspire, it’s just not a good career move.

I doubt Mr. Skinner cares, which suggests to me (again) that there remain certain crimes richly deserving of public floggings.  Even if the penitent enjoys it as much as the spectators.  After all, ‘t’is better to give than to receive.

Extra Credit: Does Mr. Skinner’s action and defiance wrapped in the cloak of holy certainty remind you of the sort of conduct certain American wingnuts routinely attribute to Muslims when condemning their anti-American faith and tolerance?   Discuss.