View From the Bottom Man

This whole business of Christmas gifts leaves me uncomfortable, but fuck me, right?  I will get them and damnit, I will give them.  It’s like voting.

One gift this year is a subscription to Rolling Stone magazine.  Great! I exclaim,  I can read Hunter Thompson every week!  Whoops.  That shut down the room.

I  am handed the issue with the “100 greatest guitarists of all time,” a challenge to my capacity as a cynic and a musician to comment.  Fortunately, I’m already blind drunk .  Besides, everybody has already heard my biases and stopped listening.  Including me. 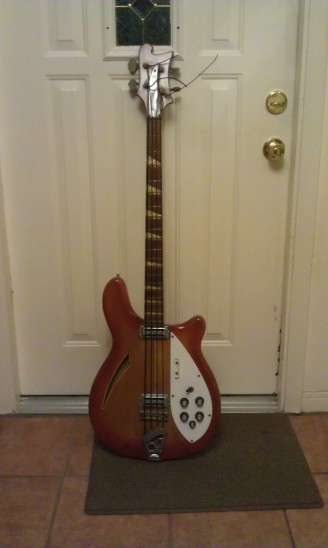 Page is the sloppiest, least original guitarist in the bunch.  Van Halen is at best a technician.  Duane Allman was very, very limited, great at what he did, but he didn’t do that much. Gilmour is a top-tenner, as is Knopfler.  Brian May was fucking brilliant.  Neil Young isn’t even a guitarist, especially compared to Chet Atkins.

Hendrix was the greatest guitarist of his era.  You really shouldn’t compare eras in guitarists any more than, say, major league pitchers.   Was Cy Young a better pitcher than Nolan Ryan?  Walter Johnson vs. Sandy Koufax?  Stop this silly shit.

Hey – it’s all fun and opinion, right?  And me, I’m just the bass player anyway.  That’s my 1967 Rickenbacker 4005.  I also play a 1967 Guild Starfire, with pre-Humbucking pick-ups, and a fretless Gibson Ripper.  That Rick model was discontinued in the 90s.  People kill for them today.  I would, too.

I’d be pleased beyond words to play with any of these guys.

And when they poll for the top 10 bassists, I better finish up there with them.  But I won’t.

8 Responses to View From the Bottom Man