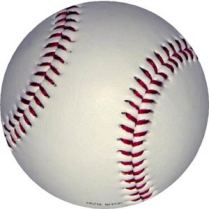 I bet I’m not the only one who is so thoroughly over the football season that by the time the Superbowl rolls around the major emotional response is relief.
But certainly not closure, not here in the nation’s dicktip, anyway.  Ten minutes ‘round the radio dial teaches you that football is a 12-month sport.  You’ll also learn that local sports talk radio is an enterprise dominated by idiots who make money by talking to imbeciles.
Tucked behind the extensive Superbowl coverage in Sunday’s NY Times there appeared a baseball column about Dick Hayhurst, a not-ready-for-the-majors (and never will be) pitcher who turns out to be a better than average writer (in the opinion of the columnist).   I especially like his attitude, which is unique and refreshing for an athlete:

When he reached the majors, he found himself exhausted by the unwritten paradox of the clubhouse, where veterans expect humility from rookies while insisting they act like big leaguers. Pitching poorly did not help.
“I got a taste of it, and I realized immediately I was not cut out for this,” Hayhurst said. “I had spent all these years on this bet, and I stunk at it.
“Nobody ever dreams about making it to the big leagues and being terrible. The lows are crushing and the highs are expected. When you stink, it’s a devastating feeling and it hurts everybody around you. You think you learn that lesson in the minors, but you don’t.”
A recurring theme of Hayhurst’s first book is the carrot that sustains so many minor leaguers: as long as you’re wearing the uniform, you have a chance. Some readers have been inspired by that, Hayhurst said, but now the thought repels him.

I’ve read some excellent sports fiction and journalism over the years, including classics like Ring Lardner and A.J. Liebling as well as ghostwritten accounts by former athletes.  This guy sounds interesting.  His two books are  Out of My League and The Bullpen Gossip.  I made a note.
And glory be, it isn’t football.

2 Responses to Next Up