Posted on February 21, 2012 by squathole
I came across the following account in an article discussing the Taliban’s business model for ransom-based kidnapping in Pakistan:

Over time the hostage developed relationships, of a sort, with his captors. Allowed to roam the compound, he fell into casual conversation with some, helped others with the cooking; sometimes, after meals, the militants would sit in a circle and make funny faces at each other. The hostage was encouraged to join in.
“The idea was to keep a straight face. At the end, everyone would burst into laughter,” he recalled with a wry smile. “It was funny and surreal.”  —NYTimes 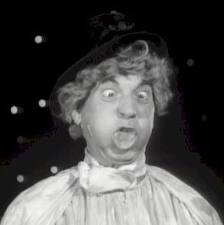 My first thought: It really does take a village to make an idiot.
But you know, in some respects, their antics are more cerebral and sophisticated than your average zit-faced high schooler playing Angry Birds, or posting photos of his painted wang in a Facebook page.  And except for some pompous choad with an accent critiquing performances, is this any more vapid than American Idler?
Still. I just never imagined Camp Terror as a place where assassins-in-training sat around a camp fire and pulled funny faces at each other.   Not on purpose, anyway.
And when they’re not cracking up one another by throwing Gookies, here’s what they’re up to:

During his captivity, four teenage suicide bombers were undergoing instruction, taking indoctrination classes in the morning and carrying mock explosive vests equipped with push-button detonators in the afternoon…. “Their mantra was: ‘One button and you go to heaven,’ ” he recalled.

That’s a serious commitment for living, breathing Mr. Potato Head Wannabes.  One night you’re waggling your eyebrows like a Persian Groucho, and the next day you’re splattering yourself into bloody projectile flesh rockets at the open air market.  This is difficult for me to grasp.
Which, I suppose, is the point.  This way of thinking is so inextricably foreign, so alien to the way we think, what we value, how we view the world and those with whom we share it.  The gap between us and them seems unbridgeable on every level; emotional, intellectual, spiritual.  All we know it they want to kill us all dead and waltz off to heaven for their eternal reward, which I guess they envision is a step up from fun and games ‘round the camp fire.
I bet the faces they make aren’t that funny, either.
Photo:  That’s Harpo, throwing a Gookie.  FGI.