Ultimately, It’s About the Gas 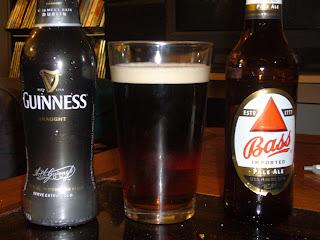 Well into Saturday night, out with friends to celebrate St. Patrick’s Day with traditional Black and Tans, it occurred to me that if the English and the Irish got along as well as Bass and Guinness, the British Isles would be a paragon of peace love and understanding.
The corned beef, cabbage, and potatoes were wonderful, too.  That was my red meat quotient for the month.  I spent Sunday farting.  As a result, the dog loves me.
In fact, I’m not a big fan of Black and Tans.  I love Guinness, and I love Bass.  There are nights, usually chilly ones, when I’ll crack open a Bass or three, then move on to Guinness, and call it an evening well spent.  I don’t drink them together, I let the stomach and bloodstream do the mixing.  It all comes out together in the porcelain convenience.
And typically, as with all things Anglo, there’s an unpleasant back story, updated to modern times:

A new sporty Nike sneaker unofficially dubbed the “SB Black and Tan Quickstrike” isn’t taking off with local Irish Americans, who say the footwear company failed to properly examine the name’s violent historical connotations.
“Naming a shoe a ‘Black and Tan’ is just silly,” Robert Mauro, director of Boston College’s Irish Institute, told the Herald. “These companies have large marketing units. They could have done a little bit more research.”
Black and Tans were a British paramilitary unit sent into Ireland to suppress revolution in the early 1920s. The men, who wore two-toned uniforms of khaki coats and dark pants, became notorious through their numerous attacks on Irish civilians. — Boston Herald

(Damn — the Boston Herald is still publishing?  I’m shocked, shocked.)
It’s an old tired tale: while the English are these tediously polite and well-mannered people, their country’s  international conduct over the centuries is anything but.  Ask any Irishman, but be prepared to duck.  Actually, that’s good advice in general.
Ah well.  Only 48 shopping days ‘til Cinqo de Mayo.
Tequila doesn’t make me fart nearly as much.

4 Responses to Ultimately, It’s About the Gas