Posted on March 21, 2012 by squathole
Citizens of the Republic!! Are you ready for your shocked-shocked moment of the week?

Sort of funny — but I guess you had to be there.  Anyway, think of that as Act I.  What comes next is side-splitting:

[Candidate Newton Leroy] Gingrich on Tuesday called De Niro’s comment “inexcusable” and demanded an apology from President Barack Obama….Gingrich said the president should be held accountable “when someone at his event says something as utterly and totally unacceptable as Robert De Niro said last night. And I call on the president to apologize for him.” 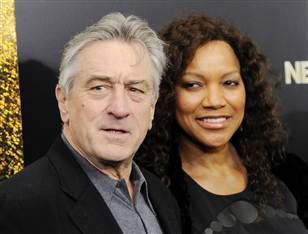 not as pretty as the Obamas

Perhaps Newton Leroy can tell us exactly why that satirical comment — offered by a white professional actor married to a Black woman (should that be relevant) to a friendly audience — is “unacceptable”?   It very nicely places in perspective all the stupid-ass conversations that went on prior to the 2008 contest, among ‘Crats and ‘Pubs alike, and echoed in the media — Is America Ready for a (gasp) ‘Buh-laaaaaack Prezydent?
I can just imagine Newton Leroy, upon hearing this account, eagerly gathering his drool-drying handlers to devise just the right stance.  “Waddya think, fellas?  Should I condemn it as undignified?  Get huffy? Tell ‘em that if a Republican said that he’d be called a racist?  What should I do?  This is gold.  Gold!”
IMHO,  Newton Leroy needs to stay out of any discussion involving  wives.  His current beta-version, the plasticine piece of crumpet whose function is to gaze in his direction with vapid adoration at campaign appearances, is nothing more than a reminder of his own hideous indiscretions , egomania, and hypocrisy. 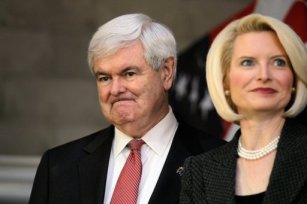 not pretty at all

“You have to place all this in perspective,” one Washington-based campaign veteran told me.  “It’s crunch time for Gingrich.  He’s down to one big backer, he’s losing momentum, and he’s just desperate.  His whole public life is going down in flames.  He’ll take any bone you throw him and gnaw it like it’s steak.  But by tomorrow morning’s papers, this won’t even be a story any more, and he’ll look even lamer for bringing it up.
“Face it — he’s become a foot-Newt!”
Now that’s funny.

6 Responses to Are We Ready?