Some Things In Politics Really Are Black and White 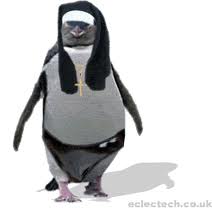 Republican presidential candidate [Newt Gingrich] is sporting a small bandage on his finger after getting nipped by a small penguin during his tour of the zoo on Friday. Gingrich was in St. Louis to speak during the National Rifle Association’s annual meeting.

During his visit to the popular zoo in Forest Park, he was treated to a behind-the-scenes visit with two Magellanic penguins. One of them nipped Gingrich on the finger. —AP

While it is perfectly plausible than the former House Speaker visited a zoo — he is a Newt, after all, and probably feels right at home — this story has a few problems that makes this correspondent both suspicious and skeptical.

My first thought is, That wasn’t a penguin.  It was probably a nun, embarrassed and humiliated that this thrice-married fraud has proclaimed himself a Believer in the One True Church while spewing hatred and ignorance on a daily basis.

(I’ve never been beaten by nuns, so I regard them sympathetically, even fondly.)

But maybe it was a penguin, and an educated one at that, who recognizes that Gingrich’s emphatic resistance to the reality of global warming is a direct threat to his (or her) native habitat.  Penguins can’t vote (yet), but they can bite.

I am certain he would have had a more welcoming reception had he visited the reptile house, or stayed with the insects where he belongs.  Mitt Romney, of course, would have visited the invertebrates where he would blend right in.

I speak for most uninsured Americans when I say that I hope Gingrich paid for that bandage.   Health care isn’t a right, you know, and when SCOTUS strikes down ObamaCare next month, only the 1% and fortunately employed will have the wherewithal to afford it.  Oh, wait — Newt’s covered.  All current and retired Congressmen have the best health insurance we citizens can buy for them.

Meanwhile, reports are that the penguin has been given a tetanus shot, and will probably recover.  Our prayers are with him (or her.  I can’t tell the difference, but I assume they can).

Hey — speaking of nuns.  Did you see this?  Silvio Berlusconi — the legend lives on!