I can’t wait for the bumper stickers and tee shirts.

Virginia delegate Robert Marshall, who led the effort to block [Tracy Thorne-Begland,] an openly gay man, from becoming a district judge, argued Thursday that a gay person on the bench could show bias when ruling in a case involving a gay and a straight person who got into a fight and he added that “sodomy is not a civil right.”

“You could preside as a district judge for a marriage of two guys if he wanted to, in violation of the law,” Marshall said on CNN’s “Starting Point.” “Moreover, if you have a bar room fight between a homosexual and heterosexual, I’m concerned about possible bias.” — politico

I get it. Bob.  Virginia is for Lovers, not Buggers.

This convinces me that the Creationists are right after all.  Evolution is a hoax.  There’s no way this elected factotum has evolved even slightly from bread mold, let alone the same ancestors as yours, mine, and great apes’. 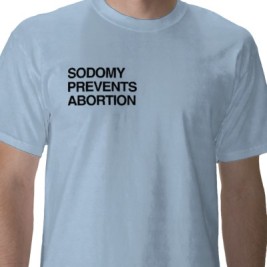 Just to play the game, if the problem with a gay judge is that he might favor the homo over the hetero in a bar fight, why isn’t there a problem that a straight judge favoring the hetero over the homo?  And when did the potential outcome of bar fights become a measuring stick for serving as judge?  Even in Virginia, that sounds kind of primitive.

As for sodomy and civil rights, see Wednesday’s post.  Or better yet, look up Lawrence vs. Texas.  You can start here.  But why bother?  The issue isn’t the candidate’s sodomy, it’s the delegate’s ignorance and prejudice.   And not only is he not alone, he’s in the majority.  Agreeing with Marshall, the Virginia Legislature rejected the candidate.

I think the only sensible approach to this problem is to settle it in a bar fight.  Maybe my favorite hangout, the Liquor and Rubber Balls Sports Emporium and Auto Detailing Shoppe, will play host.  On any given night we have an fine mix of gay and straight clientele, all dedicated to libations and fair play. Former baseball writer Vera Luz Senz could officiate.

Galloping Gomorrah.  How did the Mayans know that in 2012, people like this would be in charge?

5 Responses to Confederacy of Dunces