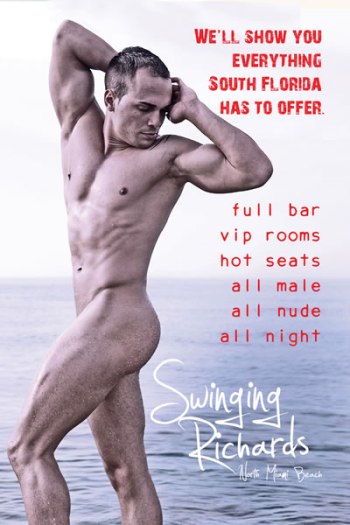 Maybe you heard that the City of Hollywood and Douglas Hewett, the new city manager on the job just 14 weeks, have parted company.  [Via Miami Hurled]

Police pulled Hewett over and handed him a DUI on Easter Sunday at about 3 am.  He had just left Swinging Richards, a gay strip club in North Miami Beach.  “I was in a hurry to get home and paint my eggs,” he allegedly told police.  (No he didn’t.  But maybe he should have.)

Hewett promptly informed the mayor and commission, who initially had his back. “I was never worried about the DUI,’’ said Commissioner Dick Blattner. “That happens. Shame on you. Pay your fine. Do your intervention or whatever the courts order. That’s a matter for the judicial system.’’

But in late May, news of Hewett’s arrest became public, and reporters revealed details Hewett had not told the commissioners….“We did not know where his drinking had taken place,” said Blattner. “We didn’t know what it was. I saw the name [Swinging Richards] in the police report, but that name meant nothing to me.”

What details?  The way this is written it appears as though the problem is that Swinging Richards is a gay club.  And then there’s this:

During a special meeting Friday,[Mayor Peter] Bober said his decision to ask for Hewett’s resignation was not based on the DUI itself, but how he handled it afterward….“If you want to claim you are being forthcoming and being straight,” said Bober. “I think you have to come forward with all the details.”

Again, I’m lost: what details?  How did he mishandle it?  And I’m a little concerned about Bober’s choice of the word “straight.”

Bober was also concerned about Hewett’s personal Twitter account that has since been removed. A Google search for his account — NC_Pimpernel — includes Hewett’s description of himself as an “uncivil civil servant.”

Bee eff dee.  In any case, what I see here is a minor infraction (to which Hewett entered a not-guilty plea) and some adolescent social media behavior. It speaks to neither his credentials nor his professional judgment. It will, however, cost the city a lot of money while buying: nothing.

He had the good sense to party elsewhere than his own city, but not enough to get somebody else to drive. That’s about it.

Nor do I see where he covered anything up. He called his employers and informed them of the episode. What details did he allegedly leave out that upset commissioners? And I don’t understand why it makes a difference, as I guess Blattner indicates, that he was drinking in a gay club.

The problem here is deeper than this single incident and the commissioners’ reaction.  Underlying the whole scenario is the insulation these elected officials erect and in which they (mal)function. They’re not smarter or more hard-working than the rest of us, despite their claims to the contrary, and what they do is no more difficult than what private sector workers do every damn hour of every damn day.

But they make it harder for themselves.  There are egos to stroke, useless procedures to circumvent, and posturing for self-promotional purposes that eat up a lot of time and energy.  The rabbit on about reputation, integrity, appearances, etc., completely clueless that in so doing they’re their own worst enemies.  With this high-profile farcical display of prudish puffery they’ve done it again.

Meanwhile Hollywood residents are stuck with the bill and a void in the executive suite. Talk about poor judgment.

6 Responses to The Real Richards