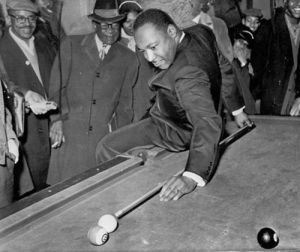 So today is Martin Luther King Day.  Perhaps you don’t remember, but the Rev. MLK’s life-long message of peace was answered by an assassin exercising his second amendment rights to silence with violence.

So it is something more than ironic — tasteless, if not racist — that it arrives one day after Gun Appreciation Day, which was celebrated by five gun-related injuries inflicted at three separate gun shows.

Other than video, I never saw Martin Luther King, but I met numerous people who did, some of whom had worked with him over the years.  They told me that while he was no saint, he was both inspirational and committed, completely dedicated to the cause of peace and racial harmony.  A distinct breach between himself and Malcolm X, for example, was his message of non-violence.

That’s one reason why the asinine remark made by Larry Ward, one of the organizers of Gun Appreciation Day s is so offensive:

“I think Martin Luther King, Jr. would agree with me if he were alive today that if African Americans had been given the right to keep and bear arms from day one of the country’s founding, perhaps slavery might not have been a chapter in our history,” Ward told CNN last week. — mediaite

What is it with these white people?  Stupid fucking douchebag.

Some of us haven’t progressed very far.  Here’s Dr. Ron Paul, intellectual ‘Pub hero and spiritual leader in the last election, on Dr. King in 1990:

“[Martin Luther King, Jr.], the FBI files reveal, was not only a world-class adulterer, he also seduced underage girls and boys…And we are supposed to honor this ‘Christian minister’ and lying socialist satyr with a holiday that puts him on par with George Washington?”

A “world class adulterer” and “lying Christian satyr.”  Is that a compliment?  Does he get a trophy?

We have a long way to go, especially among gunnie cretins waving bibles and copies of the Bill of Rights to defend their god-given rights to hate people to death they think are different from themselves. But at least nobody has asked to see a birth certificate lately.

MLK could have found a way to get over such garbage.  That’s why we have a day off today.  Going forward, I’ll try to remember that.