I Got Plenty of Nothin’

It’s Friday and about damn time.  That said, I got nothin’.  So here’s a joke (thanks, Kevlar):

Paddy and Mick get a pilot to fly them to Canada to hunt moose and they bag six.

As Paddy and Mick start loading the plane for the return trip, the pilot says, “Sorry, this plane can only take four of those.”

Paddy tells the pilot, “Last year we shot six, and the pilot let us put them all on board; he had the same plane as yours.”

Reluctantly, the pilot gives in and all six are loaded.

However, even with full power, the little plane can’t handle the load and down it goes and crashes in the middle of nowhere.

A few moments later, climbing out of the wreckage, Paddy asks Mick, “Any idea where we are?”

Mick replies, “I think we’re pretty close to where we crashed last year.”

Heh.  And here’s a funny graphic….keeping in mind there are 7 cats and a dog in this household. 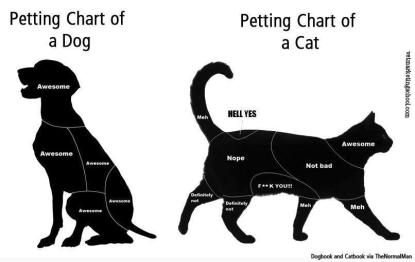 1 Response to I Got Plenty of Nothin’