Take Your Kids to Work Day

Evidently it sure is hard finding an affordable nanny.

Tooele police busted a husband and wife duo Monday after they allegedly robbed a bank and brought their two small children along in the getaway car. 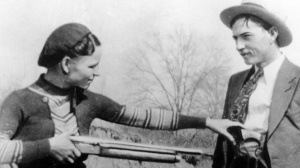 According to an arrest report, police captured the couple , both 27, at a traffic stop soon after they robbed a Wells Fargo branch located at 204 N. Main St. When officers approached the couple’s car, the report adds, they discovered two children, ages 5 and 2, sitting on the back seat.

During questioning, the couple reportedly said they planned and committed the robbery because they faced eviction, had mounting medical bills and had fallen into debt.  — Salt Lake Tribune

Bonnie and Clyde they sure ain’t.

Of course in one sense, their plan worked out fine.  In short order, they obtained housing, medical coverage, and their meals are covered.  Once imprisoned, they’ll be rid of those annoying collection agents, too.

As for the kids, well, foster care sounds like a better deal than membership in the Junior Willie Sutton Club.  Give mom and dad credit, too — they kept the kids outside in the car rather than risk exposing them to toxic financial institutional professionals.  That shows responsibility.  I’m sure the judge will take note during sentencing.

So consider this a happy ending on many levels, not the least of which is the larger lesson: when it comes to criminal behavior involving financial institutions, only the institutions themselves can be held blameless for their crimes.  That’s what Justice and the American Way are all about.

1 Response to Take Your Kids to Work Day