Guido and I actually went to the Marlins/Phillies game last night.  And we live in Broward!

I know how to get to the ballpark, but I noticed that there are exactly zero signs on I-95 advising drivers which exit they should use.  I spotted signs as soon as I headed west on 836, several seconds before the stadium itself springs into view.  Very helpful.  Not. 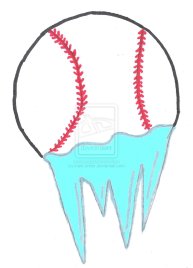 Stadium personnel are very friendly and helpful until I pull out a cigar.  “There’s no smoking allowed in the stadium!” one screeches at me, horrified, like I’m injecting eyeballs with HIV serum.

I know there’s no smoking.  Can’t I just chew on it?

“No tobacco allowed!  It’s poisonous and doesn’t match the Liberace-inspired center field statue!  And it sets a bad example —  What if THE CHILDREN see you?”

You mean parents allow kids to watch these horrid Marlins?  That sounds irresponsible.

Last time we went , Phillies fans outnumbered Marlins fans by about a 70/30 ratio, and this time seems about the same, except for the ratio part.  Of the roughly 100 fans I count in the stadium, 70 of ‘em wear Phillies gear.

Guido and I grab two $10 cans of beer  (note to the late Dennis Hopper: a 12-pack of Pabst Blue Ribbon costs less than $9  at Total Wine) and take our seats in Row 11 behind first base.  Great view, but apparently directly under a ventilator blowing tornado-strength Arctic air.  Playing baseball indoors is as sensible as mowing the lawn on roller skates.  I guess you can do it, but why?

The game pits two minor league pitchers against one another.  The Marlins’ Jose Fernandez is 19; until this season he hadn’t played above Single-A.  The Phillies’ Tyler Cloyd — how’s that for a throwback moniker? —  is 20, pressed into service thanks to injuries to the starting rotation.  Although Cloyd has some major league experience from last season, it is not in evidence in the first inning, when Juan Pierre lays down a bunt and Cloyd, clumsily covering first base, barrels into Ryan Howard (not a good career move), tying them both up and letting JP slide face first safely to the bag.

In some regards, the Phillies are a bigger disappointment this season than the lowly Marlins, who, thanks to the rape, pillaging, and gross malpractice of their ownership group, were not never anticipated to achieve a damn thing except a small profit.  The Phillies have failed to live up to their expectations: the starting pitching has disappointed, the bullpen is terrible, and they’re not scoring runs.  What’s nice about tonight’s game is, against a collection of minor leaguers still learning the game and trying to gel, the Phillies — and any MLB team — can look like the ’27 Yankees.

E.g. — Delmon Young has had a slow start this year,  Tonight he’s Lou Gehrig,  blasting one into the right field stands and crushing a double to left-center field.  (Despite this performance, he is removed from the line-up in the late innings and returned to his reinforced cage for safety reasons.  Delmon has what they call “issues.”)

The stadium is so empty, the only noise comes from stadium personnel — the keyboard player, the electronic scoreboards urging fans to clap their paws and other infantile behavior.  I’m actually afraid to fart, and not because I left my Depends at home.  Scoreboard data with the innings, score, line-ups, etc., constantly gets replaced with camera shots of fans, giddy and thrilled to be on camera.  (They somehow manage to avoid fans wearing other teams’ colors and gear, so we’re spared this indignity.)   Not only does this make concentrating on the game difficult, it raises the obvious question — Why do people go to a live sports event and spend time watching teevee?   One of the shticks is to pan around the stadium for senior citizens and encourage them to kiss, shown on the screen in a giant Valentine heart.  Senior porn.   Only in Miami.

A foul ball ends up in the vacant upper deck.  Nobody goes after it — maybe there’s no access up there.  It won’t be retrieved until football season.  Oh, wait — they don’t play football here.  Come October, this $500 Million albatross around Miami-Dade’s neck goes from nearly empty to completely unused.  Such a deal.

Guido and I are just freezing our asses off by the 7th inning.  A tiny cup of hot coffee ($5 — the green Starbux mermaid blanches in horror ) doesn’t help much.  A Marlins reliever,  one of several ineffective duds hauled in from god knows where on a bargain basement contract — appears on the scoreboard as “64 Below,” his number and name, but it feels like the temperature.  The Phillies are ahead 7-2, so we leave in the 8th.

There’s a whole lot wrong with baseball in this town, sports fans.  It’s a great game with a long tradition, capable of entertaining and educating  its fans, both experienced and novice.  But it’s hard to appreciate any of this under these circumstances, and the tragedy is that there’s really no end in sight.  What a waste.

This entry was posted in News From the Nation's Dicktip, Playing With Balls. Bookmark the permalink.