I certainly hope this is true. 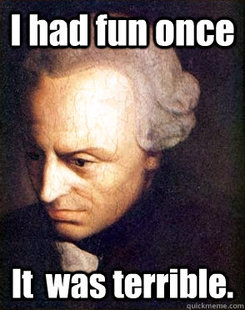 MOSCOW (AP) — An argument in southern Russia over philosopher Immanuel Kant, the author of “Critique of Pure Reason,” devolved into pure mayhem when one debater shot the other.

A police spokeswoman in Rostov-on Don, Viktoria Safarova, said two men in their 20s were discussing Kant as they stood in line to buy beer at a small store on Sunday. The discussion deteriorated into a fistfight and one participant pulled out a small nonlethal pistol and fired repeatedly.

The victim was hospitalized with injuries that were not life-threatening. Neither person was identified.  —AP

1.  Which of the following do you suppose they were arguing about:

Defend your answer, and prepare to die.

2.  Can you imagine a circumstance in the United States where a discussion of German philosophy would lead to a fight, let alone as shooting?  Can you imagine a circumstance where there would be a discussion of German philosophy anywhere in America where beer is served?  Why or why not?  What happened to “American Exceptionalism”?

3.  Imagine taking a poll among the first 100 Americans you meet in the street outside your home or place of business in which you asked them to tell you Kant’s first name or first initial .  Which do you suppose would be mentioned most:

Defend your answer and prepare not to sneer.

4.  If Kant were alive today, would he be happy or unhappy that anybody, let alone Russians, would become violent over his interpretation?  If imitation is the sincerest form of flattery (or plagiarism, as Oscar Levant suggested), where does violence fit in?  Make the case that violence is merely unbridled intellectual passion.  Then turn yourself in.

5.  Immanuel Kant wrote: “From such crooked wood as that which man is made of, nothing straight can be fashioned.”   (Uh-huh-huh — he said “wood!”)  Explain the meaning of his observation without referencing sexual orientation.  Do you think this sounded better in the original German?  Is it likely this is what those two idiot Russians were arguing about?

9 Responses to Kant Help Myself