Been saving this for MLK Day.

Last year, nearly a century and a half after the Battle of Olustee, the Florida chapter of the Sons of Union Veterans of the Civil War made a request to the state parks department. It asked for permission to place an obelisk to honor Union soldiers (who lost the battle on Feb. 20, 1864) inside the three-acre Olustee Battlefield Historic State Park, the same patch of land that holds three monuments commemorating Confederate soldiers.

But the request has enraged many in the Sons of Confederate Veterans, which views the state’s decision as a betrayal of the small park’s legacy…… To descendants of the Confederates in North Florida, the move was perceived to be the latest salvo against this area’s values and traditions. The Civil War may have ended long ago, but in Florida, unlike much of the South, Yankees never stopped marching (or rolling) into the state, lured by milder weather and tax rates. Other newcomers arrived, too, slowly eroding the state’s Southern identity.  — NYTimes

Sounds sufficiently serious for this south Floridian to grab his phone (and a beer) and get the real deal from the horse’s mouth (and parts south).  Fortunately, I have a contact in those parts —  Ray Ed Gneck, whose family has been politically active in central and north Florida for  generations.  Up that way, seems like everybody knows the Gnecks — some related 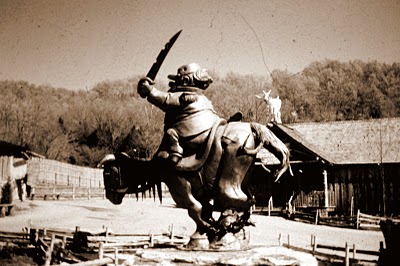 by blood or marriage (and sometimes both).

“More Yankeeshines,” he grumbles when I track him down. “Y’all know the history of that battle?  Comes down to the fact that 1000 loyal Sons of the South died in a fight where they killed 2,000 invading Union troops, and drove the rest of ‘em back to Jacksonville with their tails ‘tween their legs.  Whoever heard of buildin’ a monument to the losers right where they done their losin’?”

Don’t go there, Ray — you just described every monument in the South dedicated to the Confederacy.  Maybe you forgot — the Blues beat the Greys.  Didn’t even need overtime.

“Ain’t lost nothin’. This here’s just another skirmish in a war what never ended.  Maybe downstate where y’all handed everything to the Yanks to fuck up like New Jerk City it looks lost, but not hereabouts where folks still got respect for Southern tradition and our way of life.”

Lynching, treason, inbreeding, bootlegging, snake-handling, racism, cross burning, that sort of thing?  Yeah, I miss slavery, too.  Why, I bet without that pesky war distracting you, you’d have hi-tech flying slaves by now, right?  You a big fan of the Borg, too?

Ray Ed isn’t interested.  “It ain’t about none o’ that.  It’s all about freedom,” he snaps.  “Not bein’ told what to do from people got no business tellin’ us.  Don’t need no more monuments, least of all with Yankee names and faces.  Why, most folks ‘round here won’t even accept $5 bills cuzza that ugly fuck’s face on ‘em.  Ya think we need y’all’s names and faces in our own ‘federate park?”

He disconnects before I ask him if any of their monuments honor Jubilation T. Cornpone.

Southern culture?  Yeah, sure, I guess.  As long as we’re talking about Moonshine.