Just bear with me, okay? I know you know the punch line, but there are some younger folks present who don’t.

A pet pig is being hailed as a hero by an Illinois family after he alerted them to a fire in their home. 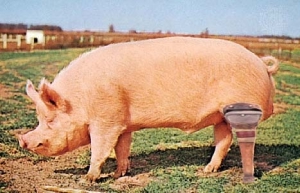 Ina Farler of Mount Carmel and her two grandchildren were sound asleep when the fire broke out at approximately 4:40 a.m. Sunday in their trailer park home. That’s when the potbellied pig, appropriately named Lucky, began to squeal.

“He started screaming,” Farler told WFIE-TV. “He would jump down, run to the door and then jump back up on the bed and hit me really hard. I sat up to see what was wrong with him, because he usually doesn’t do that through the night.

Farler was able to grab her grandchildren — and Lucky — and escape through a bathroom window. — Yahoo News

It turns out this isn’t Lucky’s first act of heroism. A few years earlier, he raced from his muddy sty into the road and pushed one of the grandkids out of the way of a tractor, saving his life. Not long after that, when another young ‘un lay choking on the kitchen floor, his frantic squealing summoned an adult who managed to get the child breathing again — she’d swallowed some plastic and was on her way to suffocation.

So when reporters asked Ina Farler about Lucky’s wooden leg, they completely understood her response: “A pig that good — you don’t eat it all at once.”

Thanks for your attention.