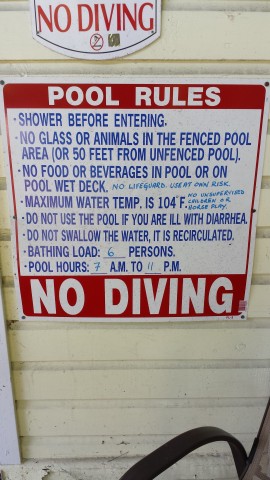 We’re back, having survived another weekend of middle-aged debauchery in Key West, many shades darker and a few brain cells lighter.

Our southern voyage tradition: open the first beer of the day to accompany the crossing of 7 mile bridge.   Used to be a Rolling Rock every time, but that ended when Rock sold itself to international brewer InBarf and became Bud Green, now concocted in St Louis instead of Latrobe, PA.  I still have the last bottle I emptied from the trip home years ago, a bittersweet memory.

This time it was Leinenkugels’ Canoe Paddler, a seasonal beer brewed in spring.  I tasted it a few months ago and set aside 4 bottles.  Plan B was Pacifico, which we’re taking anyway. Verdict: keep looking. Fell just short. Pacifico won’t work, either: too inconsistent. Sometimes it tastes metallic, which is disorienting when drinking from a bottle.

I welcome suggestions, but be warned: No Belgians, no citrus, no wheat. 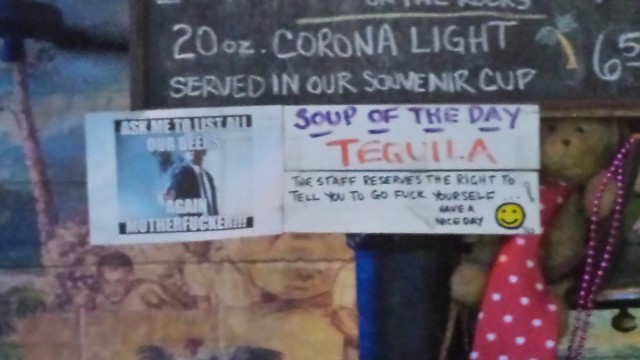 Behind the bar at the Bull

We caught up once more with Fran G’Panni, whom I met through this very blog, and as usual we arranged to meet at the world famous Bull and Whistle Bar.

“What’s with you and lesbian bars?” she asks, our third beers before us. “You write about that Liquor and Rubber Balls joint all the time, and you always end up here at the Bull.”

No pressure. The women don’t hound me, get clingy, or grab my ass, for a change.

Fran and Guido exchange one of those sour looks they absorbed from years of exposure to disapproving nuns: a toxic combination of disbelief and contempt with a touch of pity, for color.

Actually, I like the music, too (usually) although this afternoon the pair of performers of questionable gender seem more devoted to pushing the envelope than rocking the casbah. That last song was in the key of F-Flat minus dilapidated.

Next day five of us bike to the bocce courts, which are deserted as always save for the occasional strutting rooster and cautious iguana competing with the homeless for handouts (clucks for bucks? Or settle for popcorn?). I check my phone app — temperature 92, heat index 104.  It’s considerably hotter in the sun, though. Maybe that’s why there’s nobody else out here.

Guido’s approach to the game this time turns distinctly aggressive, aiming at opponents’ balls (you know what I mean) to knock them away rather than scoring on her own. It gets unnerving. We christen her “Iron Dome Guido.” Even the bocce balls cringe. 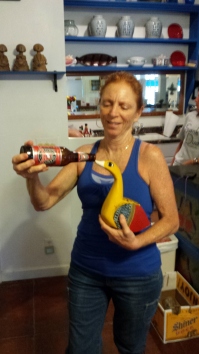 We amble down to Mallory Square to see the sunset, disappointing this time of year because it sets behind an over-developed island instead of sinking into the sea, but the sky and the water are still glorious. I repeat my offer to strangle the noisy French dwarf with the trained cats, but everybody laughs it off, except the cats who eye me hopefully.

Then, tired of fighting crowds, we head back to the house where Guido offers to whip up a batch of her sensational foi gras, using a feral chicken we capture off the street. Sharp-eyed readers will recognize the bottle of Goose Island Honkers Ale.

Thanks again, Henry Flagler, for making all this possible.

This entry was posted in News From the Nation's Dicktip, Shaken and Stirred. Bookmark the permalink.