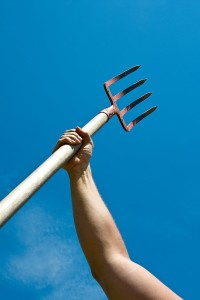 On Wednesday, in an interview in London, Gov. Scott Walker of Wisconsin, a potential Republican presidential candidate, sidestepped the question of whether he believed in evolution. “I’m going to punt on that one,” he said to an audience at a research organization in London, which he was visiting for a trade mission.

The theory of evolution may be supported by a consensus of scientists, but none of the likely Republican candidates for 2016 seem to be convinced. Former Gov. Jeb Bush of Florida said it should not be taught in schools. Former Gov. Mike Huckabee of Arkansas is an outright skeptic. Senator Ted Cruz of Texas will not talk about it. When asked, in 2001, what he thought of the theory, Gov. Chris Christie of New Jersey said, “None of your business.” —NYTimes

Keep in mind that the president of the US appoints leaders who manage billions of dollars annually to underwrite education at all levels, scientific inquiry, medical research, etc. Do any of these prospective candidates sound like the kind of visionary administrator qualified for that position? This is what passes for leadership?  They’re more concerned about placating their political base — the drooling hinds in the hinterlands with their pitchforks and bibles — than maintaining their intellectual integrity, which clearly is in neither sufficient quantity nor great demand.

Scariest of all — they’re right in their assessment of what will get them nominated, if not elected.

As much as I dread another Clinton presidency — she hasn’t even announced, yet alone run or get elected and I’m already sick of her administration– I can’t be associated with a political party that prances on a stage like this one. It’s baffling to me than anybody with a high school degree can.