Not too many tourists find their way inside the Liquor & Rubber Balls Sports Emporium and Muffler Bearings Replacement Service — it’s a Regulars’ kind of dive, and unless you are one, you’re probably less than comfortable in a lesbian sports bar anyway. The few of us who hang there who aren’t gay — Lu Senz, Duck Diamonds — have our own reasons. Besides, the beer menu is astonishing. 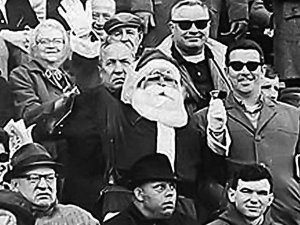 So when the guy in the Phillies hat and a suitcase marches in and parks himself a few seats away, he merits scrutiny. And when he tells Don Tequila, behind the bar as usual, what he wants in a voice loud enough for me to hear his accent, I know he’s from the City of Bodily Harm. About my age, too — hell, I might even know him.

He drains his beer in about one pull, exhales loudly, and pushes the stein back to Don for a refill, glancing over at me as he does. “Howyadoon,” he grunts. “Izzit always this damn hot in April?”

Actually, no. Hottest one ever, in fact. You heading back to Philly to cool off?

“Plane leaves in 2 hours, and it’s against my religion to fly sober.” He starts his second (Flying Fish Pale Ale, a Jersey brew, and a damn fine choice). He doesn’t find it surprising I peg him as a Philly guy; he almost expects it, and figures correctly I’m one myself. “It’s also against my religion to pay $9 for a beer unless there’s a ball game or a naked dancing woman in front of me. So I told the cab driver to drop me off at the closest sports bar” — he look around for the first time — “and she brings me here. Huh.”

A lot of drivers like this place. It’s got car-isma or something.

He recognizes that I made a joke but doesn’t quite get it. (Or maybe it’s just as stupid now as when I say it the first time.) So I ask him if he knows about the death in Philly that’s in the weekend news cycle — the guy in the Santa Claus suit who was famously bombarded with snowballs by drunken Eagles fans during half-time back in 1968.

He pushes his hat back — not much underneath, I notice — and gives me a crooked little smile. “I was at that game,” he says. “I had a weekend job in college selling Coca-Cola, and I was in the upper deck at Franklin Field where that started.

“There was snow all over. They did a shitty job of clearing it. The stadium was a shit-hole to begin with — hard narrow benches instead of seats, cement steps you could easily slip on and break your bones — and the Eagles were a shitty team season after season. Every damn game was over and done with by half-time. The only reason guys went was to get the hell out of the house for a few hours and drink with other guys who wanted to get the hell out of the house.”

“The only fun they had was drinking — they brought flasks and Thermos bottles; I used to walk through the stands hollering ‘Mixers’ instead of ‘Coke’ — booing the players, and throwing snowballs at each other and us venders. We had a game where some of the regulars would pelt me when I had my back turned, then act all innocent. Then I’d wait for a chance to throw one at them and act all innocent. Believe me when I tell you this was better than the action down on the field.

“Half-time rolls around and everybody’s plastered. Last game of the season and they’re losing badly again. Snowballs flying everywhere. Down on the field they have some lame show every year with Santa Claus — but this time there’s no Santa! We find out afterwards the regular guy got stuck in snow up in Jersey. But they spot this kid wearing a Santa suit in the crowd and convince him to pinch-hit, as it was.”

“Exactly. Another crappy season, another crappy game, another crappy day, and now a crappy Santa? But that wasn’t really the problem. In my section, where the booing and the snowballs started, they were so damn drunk and demented by that time it could have been the pope down there on the field and we would’ve booed him.

“Then I get this great idea. I took my empty Coke tray, filled it up with snow balls, and ran downstairs to the bathrooms (there were no restrooms on the upper deck in that shit hole) and put the snowballs under the water faucet which turned them into ice balls. I go back upstairs and shared them with my drunken customers. They fuckin loved it and threw every one of ‘em down on the field. It truly was a great ten minutes or so, and none of us knew we would become an enduring part of Philadelphia history, the city where the fans are so rude and nasty they booed Santa Claus.”

As a native, it brings a tear to my eye to witness this moment. Let me buy you a beer.

“And y’know, halftime was my big money-making moment as there was no concession stands up there. Me and a hot dog guy would team up and get the fans as they came out and got them before they headed down stairs to piss or buy food. So I sacrificed my big payday that game when I made those ice balls. But it was worth it. Not only did they hit with a lot more force, you could throw ‘em farther.”

He finishes his beer and then another one or two (who’s counting?), calls his cab to come get him, and shuffles off. He’s a few years older than me, and while I don’t know him, we walked a lot of the same streets around the same time.

Rest in Peace, Ringer Santa. Thanks for the history.

This entry was posted in People Who Died, Died. Bookmark the permalink.

8 Responses to Booed and ‘Balled Santa Kicks the Bucket