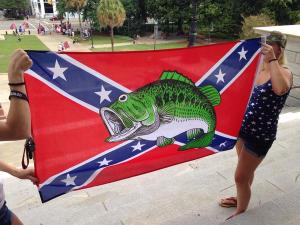 Back from Marion County this morning — I just had to see the “Pride Ride” for myself. It’s just not often one has the opportunity to be immersed in such a colossal stew of ignorance, bigotry, and simmering violence (outside of football season, that is).

Pride Ride brought in thousands of people to show support for the Confederate flag. A parade of motorcycles, trucks, SUVs, etc. started (appropriately enough) at Ocala’s Livestock Pavilion, and proceeded for about 17 miles blowing horns, flinging beer bottles, and, when passing through a Black section of town, firing guns. Southern pride, you see.

“If they take away our flag, next thing they’ll do is take away our guns,” was a commonly expressed concern. “What’s next? Our freedom? Our beer?”

Certainly not your brains, Farley. They disappeared long ago.

“This ain’t to do about race,” more than one dimwit assured me. “This is about culture and tradition — a way of life. That there flag honors the memory of traitors who went to war over the right to own, beat, and rape a bunch of sub-humans they bought and paid for, who tyrants from Washington actually wanted to treat like human beings. Fuck that shit.”

The bad news is there are so many out there who take this seriously. The silver lining is, they’re willing to out themselves, standing tall so the civilized world can spot them. That’s the beauty of freedom of expression: it encourages morons to flush themselves from the bushes where we can mock and jeer them to our hearts’ content, and cite their idiocy as evidence that the values they profess and attitudes they exhibit means much work still needs to be done.

It is not coincidental that these puke puddles accumulate in red/conservative/Republican strongholds — where any mention of racism is immediately attributed to Blacks “playing the race card.” And note how quiet ‘Pub wannabe candidates are about the issue.

Meanwhile, Marion County’s courageous political leadership is still trying to decide what to do with their Confederate flag. What, there’s no need for extra toilet paper in the outhouse?

9 Responses to “Heritage Not Hate.” And Big Mouth Fish.