Okay, enough. I’m done wading through Facebook posts, one after another, wailing and ranting about the “war on Christmas” and blaming some mythological movement of PC armies for squeezing the bejeezus out of Jesus. 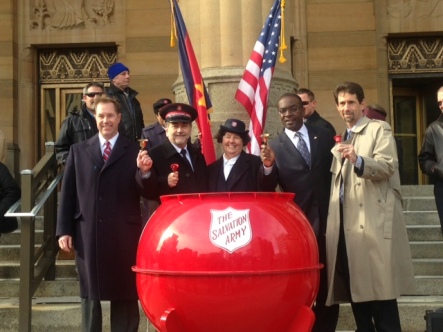 It’s Starbucks scraping the symbols off their coffee cups!

It’s people claiming to be offended by the non-inclusive words “Merry Christmas!”

Armies of atheists are out pressuring shopping malls to savage Santas and destroy decorations!

Anti-Christians are buying billboards encouraging the Faithful to “skip church this Christmas!”

Just stop. There’s no war, there’s no conspiracy, there’s no movement. You’re seeing sporadic assholery no different or dangerous than any other, and there’s no need to get lathered up about it. In fact, you’re just being played for a gullible tool, so by saving your breath you’re also saving your face. If you care.

Now if in the spirit of Christmas you’d like to do something meaningful and constructive, try exercising your charity muscles instead of your mouth. I recommend sending a check to The Salvation Army. This is their busy season, when they not only do what they do every day of the year — feed and clothe the homeless, provide family counseling, conduct health and addiction programs, assist with disaster relief around the world — but also take to the street corners with their bells and kettles to enlist support one dollar and one donor at a time. They make sure it all goes back to those who need it most. They work their asses off, and ask for quite little in return.

I realize it’s a lot more fun to wax furious and blow up with righteous indignation. Well, shit in one hand and put your pique in the other and see which weighs more. Re-posting idiotic Facebook memes is at best worthless and always irritating — do something useful instead.

Or as us atheist types like to say, STFU and write a check. Merry Christmas!