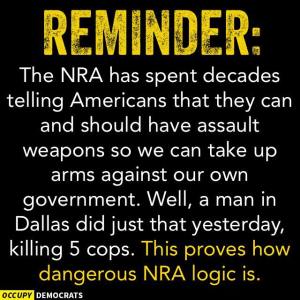 Nothing like a morgue full of assassinated cops to cook up confusion among the ammosexual community. All of a sudden everything they’ve been babbling about seems not just suspect, but stoopid.

Start with “The best defense against a bad guy with a gun is a good guy with a gun.” In Dallas there were dozens — hundreds — of good guys with guns, some cheek-and-jowl among the protesters supporting the cause and ensuring the safety of the public. How’d that “best defense” work out? The word “tragically” comes to mind.

Ammosexuals, True Believers who gravitate Republicanly, are fond of claiming that an armed society is a safe society, and that more guns in the hands of more citizens is a good thing. This summer they’ll get to express their views at the Republican National Convention in Cleveland, OH. Like Texas, Ohio has open-carry  laws — legal gunnies can proudly parade them into the 1.7-square-mile area where many events and protests are anticipated. How does open-carry Cleveland like that?

“Obviously, everybody is on edge after Dallas,” Brian Kazy, a member of the Cleveland City Council and its Safety Committee, said in an interview Sunday evening.

Mr. Kazy said he had never been concerned about Ohio’s open-carry laws. But then Micah Johnson, an African-American sniper said to be determined to murder white police officers, went on a rampage in Texas, which also has open-carry laws.

Whoa! What does this say about a “well-armed militia”? That the cops would actually gun down a citizen specifically because he was exercising his Constitutional right to bear arms? What do the police say about this?

Stephen Loomis, president of the Cleveland Police Patrolmen’s Association, said he strongly supported citizens’ rights to bear arms, but he is urging people not to take their guns anywhere near Cleveland’s downtown during the convention.

“The last thing in the world we need is anybody walking around here with AR-15s strapped to their back,” he said. “And the absolute tragedy in Dallas is proof positive that we just cannot allow that to happen. I would really just beg these folks, just leave your guns at home. Come, say whatever it is that you want to say, make whatever point it is that you want to make, but it’s going to be very, very difficult to deal with the R.N.C. as it is.”

So while  he strongly supports the right to bear arms — he even more strongly begs people not to do it, at least visibly. You need to have a bifurcated brain to make sense out of this, but that’s what happens when ammosexuals confront the Real World. More proof?

Eric Pucillo, the vice president of Ohio Carry, a gun rights group based in Kent, Ohio, said he understood Mr. Loomis’s concerns, but stressed that people could not be legally prevented from carrying their guns downtown.

Screw what the cops want — he knows his damn rights! Keep in mind these are the same breed of deep thinkers and true believers who insist that the reason so many Black people are shot down and otherwise harassed by law enforcement is “they just don’t cooperate.”

Last I saw, even the staunch defenders of 2nd Amendment rights who chair the ‘Pub Convention Committee have prohibited weapons on the floor of the convention hall. That pesky real-world concern that maybe having armed conventioneers pissed off at what, anything? everything? — might not in fact make for a safer environment. Despite their moronic chants and rhetoric in the service of the arms industry.

When will ammosexuals finally figure out that shots are for drinking?

5 Responses to Ya Still Gunna Believe?