Although I had occasion to think of at least some of these synaptic fragments this week.

We’re getting a new roof. After 17 years old and three separate patches, our roof is porous as the Mexican border, but a lot more humid.

The roofers leave a ladder up against the front of the house for the inspector to use – SOP. Inspector climbs up, pokes around, then signs off (or not) on paperwork so project moves forward. Although I understand that in some parts of Florida, the only climbing the inspector does is out of his car to saunter into the office to exchanges a signature for an envelope stuffed with cash. It’s just bidness.

After lunch, I climb up to the roof to clean out some dead palm fronds and seed pods with my defrondulator (pronounce that with Schwarzenegger accent). The defrondulator is a 9 foot long bamboo stick I harvested some years ago when our bamboo was just out of all fucking control. It has a few nubs and branches good for grabbing and yanking. Awkward, but effective, and better than anything similar I’ve ever bought at Home Depot.

I’m up there 20 minutes, having a glorious time in the afternoon baking sun, reaching for and yanking fronds off the areca palm and flinging them down to the back yard. But all things must end, and soon there’s no more in safe reaching distance, so I make my way back over to the front of the house…….and the ladder isn’t there anymore.

It’s one of those moments, a balance between Twilight Zone and Laurel & Hardy. There had to have been a ladder there less than half an hour ago. Same house, right? Ladders don’t walk. So — where is it?

I yell for Guido, who comes out curious, and ask her if she moved the ladder. No, she hadn’t. Nor did she hear anybody take it away. “I heard something,” she says, “but I figured it was you up there.” I suggest she quickly call the roofing company and ask if anybody had just come back to remove the ladder. She does. Somebody did. She tells the rep her husband is on the roof, stranded. “OMG! Let me get my guy on the phone!”

Ten minutes go by during which I devise two alternative dismounting strategies, both certain to cause injury. One is to leap for a sturdy palm and make my way down, monkey-like. The other is to jump down on the roof of the shed, easily accessible but a very steep pitch, then climb down the step ladder Guido could set up for me. The maneuver from shed roof to step ladder is not a surefire success, assuming I don’t teeter off the shed’s steep incline first. 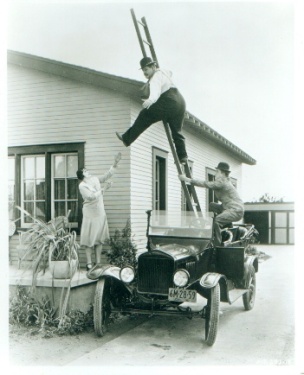 Really, all this picture needs is a sixpack and the famous last words of rednecks everywhere: “Hey fellers! Watch this!”

Fortunately, before I settle on Plan B (Bruises) or C (Contusions), Mr. Roofer returns with the ladder and makes them both moot. “I only climbed high enough to unhook it from the roof,” he says. “Didn’t expect nobody up there – not this time of day, anyway.” Shakes his head. “Been roofing over 25 years and this is the first time I ever stranded anybody!” He squints my way. “What were ya lookin’ for?”

I show him my defrondulator, explaining how I take the opportunity when I can to clean out the palms, pulling all the dry brown crap out so they look better. Besides, the sun is fabulous up there, all that reflected heat and bouncing UV waves. He nods neutrally and thoughtfully, then asks Guido, “So how tempted were you to just toss him a beer and leave ‘im there for a while?”

I get no respect. No respect at all.

Anyway, I’m back to earth and vow to never climb up again without taking a phone (a parachute wouldn’t work). And if using anybody else’s ladder but my own, making sure it’s in view at all times. No question I’ll be up there again, of course. Gotta get my money’s worth on the defrondulator.