The Ace of Cubs

The three of us secure perches at our usual spot on the rounded far edge of the bar, where we survey the churning curiosity that comprises the customer base as well as the teevee screens with updates on the latest world chaos and sports developments. We all have our priorities as well as our favorite beverages, and when ensconced here at the Liquor & Rubber Balls Sports Emporium and Underarm Lasering Center, we address them each in turn. 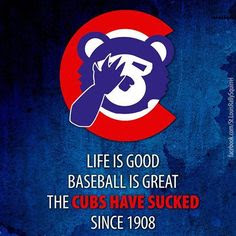 As is their wont, professional gambler Duck Diamonds and retired sportswriter Vera Lu Senz are needling one another over the impending World Series. While Duck won’t say whose money is backing which team or state his own preferences, of course, he thoroughly enjoys tormenting Lu Senz — who spent over 30 years covering the Cubs as a Chicago beat writer — about the team’s prospects.

“How can they lose, Lu?” he asks innocently. “They win 108 games so far, what’s four more? What could go wrong? It’s not like they’re gonna collapse now, right? Not the Cubs!”

“What’s four more? I dunno, Duck, what’s 108 years? You’re talking about a team that perfected the art of snatching defeat from the jaws of victory. St. Jude’s poster child.”

“Leave your snatch out of this, willya? Besides, the Injuns are as snake-bit as the Cubbies. They’re the only team to lose a World Series to Atlanta when the Braves kept finishing first every season but losing big ones. 1995, right? Last time they won a Series was 1948 against the Braves. The Boston Braves. They’re baseball’s Harold Freaking Stassen.”

So Lu — you think there’s something to the various Cubby curses? The billy goat? The black cat? The Gatorade Glove? Not to mention Steve Bartman.

“No, it has nothing to do with curses,” says Lu, dismissively. “Look — this Cubs team has extraordinary talent and youth, but more important, they’ve gelled as a team. If the regular season didn’t prove it, then the LA series did: totally shut down for two straight games and then they’re back with a vengeance.”

“Made the Dodgers look like the Cubs,”  observes Duck. “Dropped fly balls, runners picked off, missing cut-off men and tossing the ball all over the infield…..”

Lu Senz very deliberately pulls a cigarette out of the pack, fires it up, exhales, then sips her neat Jack Daniels. Her smile is sad but lovely; she sighs with both grey-blue eyes.

“What I came to understand all those years in the press box, dugout, locker room, and taprooms after the game and deep into the night is that the whole entire reason people love the Cubs is precisely because they’re helpless fuck-ups,” she says.

“Tomorrow two of baseball’s most snake-bit teams face off, and only one can lose again. The Cubs lucked out much the way Hillary Clinton did: drawing the only opponent they (she) could prevail upon.” She pauses for another drag. “I think they’ll win. But…..

“I will root for the Indians for historical reasons. What I and millions of fans love about the Cubbies, what makes them interesting, is their frustration and futility. I’m a traditionalist. Let’s preserve tradition.”

“You’re gonna root against the Cubs?” hollers Duck, incredulously. “After all these years of living and dying with their every season? Have you no heart, no loyalty?” He peers at her like a snake eyeing a rodent. “Hey — you crying?”

“Fuck off, Duck,” says Lu, eyes wet but jaw set. “You butt-sucking sportshole. You don’t know what love is. I love the Cubs, okay? Love ’em. My whole damn life. And that’s why they need to lose.”

It seems like with this the entire raucous bar stills, as time itself pauses to consider. A passing bird falls from the sky into the parking lot. Don Tequila, tending bar, becomes a statue. The ice in a dozen mixed drinks clutched in sweating hands throughout the room stops melting. And then somebody flushes a toilet, and a cell phone rings.

This entry was posted in The Adventures of Don Tequila. Bookmark the permalink.

8 Responses to The Ace of Cubs