Editor’s Note: Important to get this up before the game tonight to demonstrate my prognosticatory talent (True, I control the Delete button.)

Cubs fans everywhere lately — you notice? They make great losers. It’s only when they rebirth themselves as something else that they grow tiresome. Like the red-faced oaf I found myself next to at the foot binder’s on Wednesday. 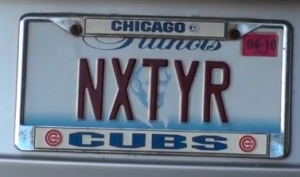 “Well, it was a great season.”

“We didn’t lose. We won 103 games — the best record in the majors. Seven players to the All-Star game, including the entire infield, first time since the 1963 Cardinals. Broke a 70 year drought just by getting to the World Serious.”

“Take the long view. It’d been years since the Cubs had any real shot at doing something. The last time we finished in 1st was ’98, and we got promptly eliminated. So they tore up the team, brought in the new guy Epstein who turned the RedSox around, and started the rebuild.

“It was agony. In 2012 we lost 101 games, so losing 96 the next year felt like an improvement. In 2014 it was less than 90, and for the first time you could see a real team gelling in there. Boom! 2015 they win 97 games, but it’s a tough division that season and it’s only good for 3rd place. And then this year, they arrive. First place, 17 games ahead of the Cards. Beat the Giants, beat the Dodgers, win the pennant, head for the Serious.”

“Yeah, okay. It was a great team, a great effort, and a great story, okay? That ain’t losin.”

No, that ain’t losing. Losing is what you did actually playing the World Series. It’s like you went to a great restaurant, beautiful ambiance, great service, and they bring you empty plates. Satisfied? remember to tip your server. Or hey — you meet this beautiful girl, you get her home, you hit the sack…..

“Yeah yeah yeah stop right there. You ask any Cub fan, and there’s millions everywhere, how they liked this season and they’ll tell you it’s the greatest one they remember and had the times of their lives.”

That’s because anyone who could remember the last World Series they won has been dead for decades. But still voting somewhere in Chicago. Hey, I’m glad you had a good time losing. You sound just like Red Sox fan before they broke through. Yankees fans have a term for this: Loosuhz.

“Yeah, well up theirs. Just wait’ll next year.”

Heard that before, too. Chicagapoligists. They want to mark everything on a curve, and they lose out anyway.