In my little patch of eastern Hollywood, we’re in Year Two of a project that has featured streets and alleys torn to shreds and barely paved over or just left raw, floods from backed-up sewers and broken pipes, traffic detours, ruined sidewalks and lawns, non-stop construction noise, and no end in sight. Allegedly this has something to do with replacing a crumbling water and sewer system, but I suspect it’s more about keeping workers on the payroll. Not that anyone’s seen them do much work. 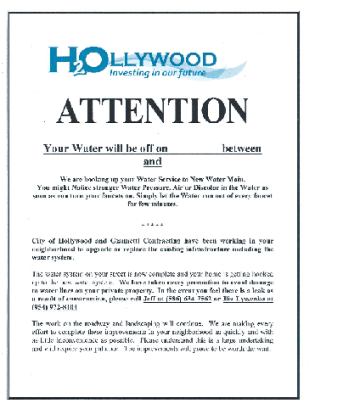 It’s been a real pain in the package for too long now. What fries my buns is that nothing happens —  they rip a street apart then disappear for literally months while they go do something else somewhere over the rainbow, leaving the residents to deal with detours, floods, and poorly patched streets.

So imagine my delight yesterday when I discover this note on my front step. Note that it doesn’t bother to inform residents when our water will be turned off, or for how long. I promptly call the city and get Squindecia on the phone. (I think I got her name right.)

She hears my concern, then pulls up some records to see what’s going on. “There’s nothing here about turning off water in your neighborhood,” she says.

So, what — this flyer is some kind of prank? It’s not really yours?

More audible pressed keys. “No, sir, that’s our flyer. What it says is the work on the water system is finished, and you might experience a difference in water pressure or coloration.”

I look once more at the flyer. In very large font, boldfaced and underlined beneath the word ATTENTION, it reads “Your water will be off on between and” then goes on to talk about pressure, discolor, etc.  So pardon me for being a native speaker of the language, but either there’s missing information on that top line or somebody doesn’t know not to string disconnected prepositions and conjunctions together without referents.

“The reason there’s nothing on that line is because we’re not turning off the water,” she explains, a little less patiently than before.

Why would you distribute flyers about turning off the water when there was no plan to do so? Is this the only flyer you have available?

“No, sir, we have flyers that warn customers about potentially poisonous chemicals and fecal matter in the drinking water, too. If you prefer, I’ll send you one right after I shit in your pipes.”

Okay, so, the conversation didn’t quite end that exact way, but we weren’t far. Evidently I’m the only citizen in the neighborhood who found this flyer disturbingly vague (see reference above  w/r/t “native speaker of the language”). Although when I show it to Guido when she gets home, she has the same reaction. “What? When? Why doesn’t it tell us when?” she fumes.

Tempers are short around here — two years of living in high Kabul style has frayed nerves. Nobody at the city level seems to care, and now that we have a new mayor and city commissioner,  when we complain they’ll blame the outgoing parties. That’s called “smart politics.” Remember that when you observe what happens next on the national level. (Speaking of shitting in the pipes.)

12 Responses to Water This