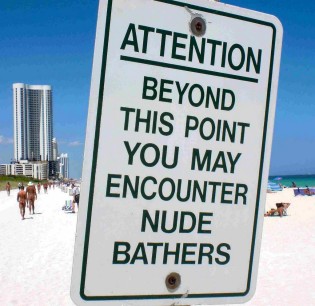 It’s more than a week since a shark attacked a swimmer off Haulover Park, Miami Beach’s historical clothing-optional beach, but things seem to be back to normal. Or at least as normal as it is to see men and women of all ages wandering around, swimming, sitting on chairs and towels in their (often terribly wrinkled) birthday suits.

Haulover also hosts a Tanorexics Anonymous chapter, over which Tanya Hyde presides going on 25 years. Today when I drop in she is just finishing up a yoga session, she and her dozen or so students nonchalantly naked as they roll up their mats under the blazing sun.

The raw truth is that most mortals don’t look very good in the relentless light of full sunshine, which emphasizes every crease, blemish, wrinkle, and imperfection to which the human body is subject. Tanya Hyde is a glaring (and staring) exception. A tall, lean Nordic blonde with hauntingly crystal blue eyes and flawless complexion, she moves with the muscled dexterity of an athlete, exuding grace and beauty from deep within. Maybe she isn’t human.

“Where’ve you been, stranger?” she greets me with that dazzling Viking smile. “And why are you still bundled up? No wonder you’re so pale.”

Here among the tanorexics is the only place on earth where I could be called “pale.” As for “bundled up,” I’m wearing worn shorts, a hat, and some jewelry. So I drop the shorts. As they say, when in Rome, get drunk and vomit.

Eventually I ask her about the shark attack, and if her group is okay.

“Papers report that might be the first incident in these waters ever. And that shark was provoked by a lifeguard trying to herd it away while warning bathers. So, no, we don’t see a trend, and we’re not especially concerned. More important, the swimmer is okay.”

Has to be unnerving — out in the water with your equipment exposed when a shark swims by.

Tanya laughs. “Like a bathing suit and jock strap are going to stop a shark bite? No, if you’d hang out with us more (excuse the pun) you’d see how natural it feels. Not unnerving at all.” She purses her lips. “You ARE wearing sunscreen on your paler parts, aren’t you?”

Um, no, and please don’t offer to help me apply it or I might say Yes.

We talk about some of the people in her group that have passed on — she prefers the term “faded away” — some after years of painful melanoma complications. One old timer (nickname: “HighNoon”) kept his routine of 10 hours’ sunshine even on days where he was undergoing treatments, coming straight to the beach from the clinic.

“He hated those bandages,” says Tanya, wistfully. “He was so upset that he’d have pale spots and tan lines when he was laid out in his coffin. But the undertakers did a marvelous job.”

11 Responses to Finny or Dye