Even in South Florida, this was no weekend to enjoy a cold beer, although Lard knows I tried. It’s especially challenging, because Guido and I agreed to clean out a bit, and vowed not to drink any hard liquor the entire month. Without tequila or Jack Daniels to keep Jack Frost at bay, what’s a man to do? And don’t even think about pointing a cup of hot milk at me. Udderly inappropriate.

So here I am at Total Wine, exercising my Frequent Imbiber mileage, and I stumble (literally) across a twofer deal in the beer aisle. Mix and Match — any two six-packs of Blue Point products for $10. That’s about half the going rate ($9.95).

I’m a big fan of Blue Point Toasted Lager, which is good in a bottle (and remarkable on tap), so I grab it. I see they’re offering Summer Ale, too, which is okay, although not as good at the Lager in my book, but mix and match it is so I grab a six of those, too.

(Twelve cold Blues. As in, twelve bar blues? I’ll work on that.)

The Summer Ale turns out not as I remember it. This may be because it’s brewed for summer climates, and whatever else you want to call this first week of January, “summer” won’t fly. (Sidebar: If I had a dollar for every nimrod I’ve met over the last 30 years who tells me they could never live in Florida because they’d “miss the change in seasons,” I could move to Hawaii, and sure as hell would. Is it ever 45 degrees in August here? This ain’t Duluth.) 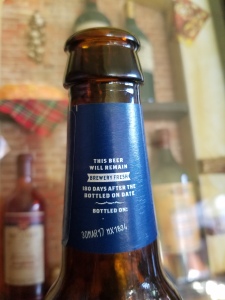 But then I spot this on the label, and see that maybe there’s another reason: this stuff has outlived its shelf life. That might explain the sale, too.

Needless to say, I drank it all anyway. Who am I to turn up my nose at the elderly?

The other day when I am back at Total Wine (yes, I’m a regular: they even run out and offer to park my car when they see me coming) I spurn the Summer Ale in favor of two six-packs of Toasted Lager, figuring I would tell them that ‘mix and match” means “one on the left and one on the right.” But they don’t even ask, just ring up the discount. 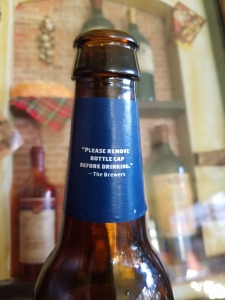 o, as they say in the massage business, Happy Ending! To which I’ll add a shot of the third graphic on the bottle’s neck, which suggests perhaps Blue Point has encountered some of the same clueless weather clodpates that I have. Or other varieties.