In case you missed it, this month the Broward Sheriff’s Office (BSO) obtained a risk protection order against one its own bailiffs, leading to a seizure of that employee’s collection of 67 weapons. 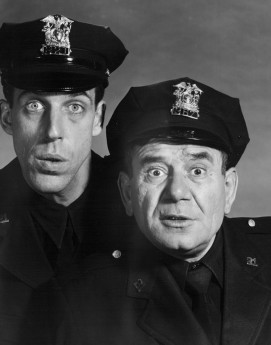 The order was signed after the bailiff, Franklin Joseph Pinter, allegedly exhibited troubling behavior in the courthouse, and he’s since been relieved from duty.

Court documents obtained by the Sun Sentinel detail several allegations leveled against Pinter by his colleagues. In one May incident, a bailiff said that Pinter told him to “get the f— out of here” and that “all you rats should be exterminated.”

In another incident in January, Pinter was allegedly seen pretending to hold a rifle and shoot the people walking below the court’s atrium. He also told another bailiff that he wanted to burn two other bailiffs with a blowtorch and “exterminate” another of his colleagues.

The court was also concerned by an alleged statement Pinter made that “nobody will take my guns, not over my dead body.” Court documents cite another incident in which Pinter showed off a new Glock in the courthouse parking lot and told a colleague that he had bought an AR-15.  [via]

Said BSO bailiff is the first neighbor I met when I moved to my current location — I’ve known him for 30 years. While it’s not surprising he has his own personal armory socked away, the only weapon I ever see him brandish is a church key. He has occasional confrontations with other neighbors, but then, so have others up and down the street among themselves, including me (although not with him). This is south Florida. People aren’t all that neighborly, have you noticed?

BSO has been dodging shit flung from all quarters ever since the Douglas School shooting incident, parents, the local and national media, politicians, even schoolchildren. They manage this badly, make a lot of mistakes, and prove themselves inept at playing defense. It’s hard not to see this latest action as a bravado attempt to look proactive. I can practically hear them in executive session: “Hell, we got to do something,” to get their mojo back in the public eye, rather than wait for the next incoming splatter.

A few days after the bust, Channel 7 Local news (“If It Bleeds, It Leads!”) sends a “reporter” and cameraman out here to knock on doors and probe neighbors’ reactions. I’m out on the lawn hacking down overgrown dracaenas and clerodendrums, so I see them canvassing the neighborhood. Inevitably our paths cross, and the reporter engages me.

She asks me what I think. I tell her I don’t know anything – which at the time is true. All I see that day is a bunch of BSO vehicles outside the house. When she asks me if I’d like to know, I say Sure, and she tells me, and THEN asks me for a reaction.

With the camera pointed at me, I opine that one county law enforcement employee referring to other county law enforcement employees as rats deserving of fiery extermination is unfair to rats – call Truly Nolen. (She blanches somewhat.) I tell her that I know my neighbor casually, that we’ve talked over the years, and that he has a tough job where he says they’re trying to get rid of him: he’s been there a long time, costs them a lot of money, and doesn’t like listening to suck-up assholes with less experience than he has pushing to get ahead in government service. 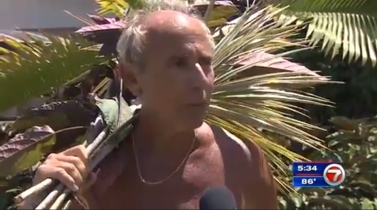 This is not what she comes out to hear.

I explain that over the years I observe any number of squabbles and arguments between neighbors over minor infractions and misundertsandings, and while I see this guy red-faced and belligerent plenty of times, it never escalates into genuine violence. I don’t mention the incident where I personally shove my own next-door neighbor on his boney ass, who then makes a threatening remark about “getting his .38,” in turn inspiring a call to the police who come out and tell us both to grow the hell up already.

This is south Florida, I remind her — a crowd, not a community. It would be useful if BSO’s armed clods would concentrate on the genuinely dangerous. So if you took an analysis of everybody on this short block, yeah, Frank is one of two people who might be ranked as potential threats. But in the Real World, neither one is.

Needless to say, it’s that remark about “one of two people” that makes it into her report, because teevee news isn’t really news, it’s plebian entertainment. Her goal is to advance her agenda, push this story about danger in the neighborhood, a hostile bastard despised by his own colleagues and neighbors, outed and disarmed! Film at 11! Bullshit round the clock!

Here’s her 2-minute report. She gets a few others to comment, too. Judge for yourself .

Frank’s never gonna win the Mr. Congeniality trophy, but he doesn’t deserve to be scapegoated like this, even though it sounds like he made it easy for them. There are hordes of dangerous people around, many armed with weapons they shouldn’t own, but he’s not one of them. Law enforcement as well as government need to deploy their power and resources sensibly, fairly, and responsibly, three adverbs rarely applied to their activities. If BSO and the justice system can’t tell who’s who, we’re in just as much trouble as it appears we are.