Gosh look what day it is! Time to rerun this post, last seen in 2015, and edited ever so slightly to accommodate the day the holiday occurs. Some holiday — its celebrants refrain from eating, although most Jews of my acquaintance limit their fasting to between meals. And they complain about that, too!I 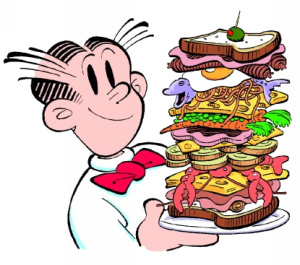 f you know any Jewish folks (and “some of your best friends are Jews,” right?), you might be aware that they’re in the midst of the holiest time of year. The 10 days between Rosh Hashanah (New Year’s) and Yom Kippur (Juvenile Sardine) include Shabbat Shuva, the “Sabbath of Returning,” a period for self-reflection in which to justify their existence to god. The way it works, god opens the Book of Life on Rosh Hashanah, and by the time he slams it shut 10 days later on Yom Kippur, he has determined whether or not your dirt nap is scheduled in the next 12 moons.

Sounds cut and dried, no? But the way it’s set up, you have those 10 days to repent, to cleanse, to ask forgiveness of those you’ve screwed over or treated badly in the course of the year. And if your performance is satisfactory, maybe the Big Guy cuts you a break, although let’s face it—the god of the Old Testament was known for having a shorter fuse than Donald Trump. And a little less money.

On Yom Kippur, often referred to as the Holiest Day of the Year, Jews are required to fast, avoiding all food and beverages from sundown to sundown (actually, 25 hours). In so doing, they emulate the angels, which never eat or drink—or bathe, and in fact, certain Orthodox Jewish groups practice this omission as well. In sticky South Florida, this is inadvisable if popularity is a priority. In any event, it means that at the conclusion of the holiday—yeah, some holiday, sort of like calling a trip to the colon cleanser a holiday—there are lots of teeth-grindingly hungry people let loose in the streets. Many head for restaurants to break their fast.

South Florida has a large Jewish population, which suggests that area restaurants must brace themselves for an influx of ravenously hungry diners. I called around to a few that share their neighborhood with synagogues to ask what it was like. (None of them would talk to me unless I promised not to identify them.)

“It’s the worst goddam day of the year,” one deli owner exploded. “I wanna tell you, and remember, these are my people I’m talkin’ about, they’re pushy and demanding when they’re not starvin’ to death. When they bust through that door tonight they’re positively drooling. Some of ‘em start licking the salt shakers!”

The manager of a Spanish cuisine restaurant shrugged his shoulders. “The customers are no worse than they are any other night around here,” he said. (Pause.) “They’re no better, either.”

At the pizzeria the chef laughed and clapped his hands. “Oh, boy, Young Kipper!” he exclaimed. “Bigger than the SuperBowl! Better’n Christmas and the 4th of July! What I do is I bake ahead—I got dozens and dozens of shells all set to go half heated. They come through the door all dressed up screamin’ and wavin’ and shovin’ aside the old and the lame and I’m slicin’ and boxin’ and grabbing the cash! You never seen so many people burnin’ their mouths, tomato stains all over their white shirts, neckties, and beanies. Hooey! I bring in my whole family to help out. I fuckin’ love Young Kipper!”

So there’s your story, South Florida. Family values, respect for tradition, celebration of diversity, observation of faith. Maybe a little gluttony– but it’s holy gluttony, godammit! What a great community we share.

This entry was posted in Golden Oldies (Deja Vu All Over Again). Bookmark the permalink.