Glenn Beck, quite possibly the most ludicrous teevee personality since Chuck Barris, has learned he may go blind:

After having trouble focusing his eyes a few weeks ago, the conservative talk show host says he went to a doctor, who informed him that he has macular dystrophy.

“Is that that Jerry Lewis thing?” Beck, 46, quipped to a crowd of 6,000 fans Saturday during his “American Revival” event in Salt Lake City.  — people.com 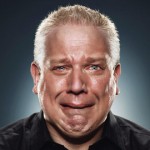 The man is sooooo un-original.  His mentor Rash Limbo went deaf years ago, and only now he gets around to this?

While blindness is the most severe effect of the condition, lesser results include blurred vision and inability to focus.  Of course, anybody who’s bothered to listen to this bozo for any length of time knows he’s had these problems for a while.

It won’t make any difference to his show business career.  After Limbo’s drug use burned out his ears, it was widely observed that he never bothered listening to anybody outside them anyway, least of all his ex-wives.  Similarly with Beck – it’s not like he ever reads anything, or has the capacity to see what’s right in front of him.  Deaf?  Blind?  Bee Eff Dee.  So long as they can blather on, their careers are secure.

“It’s not the worst thing in the world,” Beck bravely told his audience.  “And besides, I have excellent health care I paid for myself, not like the millions of useless deadbeat Americans and their socialist President who want the rest of us to buy it for them.”