Posted on March 27, 2012 by squathole
“Candy is dandy but liquor is quicker.” — Ogden Nash 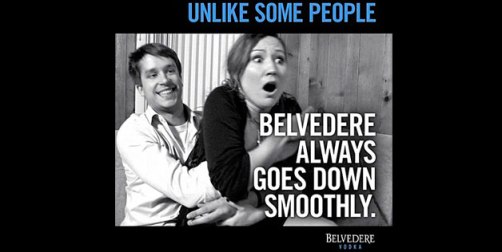 Belvedere vodka published an ad on its Facebook page this week that, inexplicably, featured a startled (terrified?) woman being seized from behind by a grinning, drunken-looking dolt. The accompanying text, “Unlike some people, Belvedere always goes down smoothly,” might as well have read, “Sexually motivated abductions and rapes are easier to pull off when the girl’s drunk.” Within a couple hours, the furor reached such a pitch that Belvedere pulled the ad and issued an apology (“As always, we continue to be an advocate of safe and responsible drinking”) — but not before at least 403 Facebook users had “liked” the ad, while those complaining about its content earned such criticism from fans, such as “Grow a pair, its [sic] funny.”  — now.msn

It is kind of funny in an irresponsible, porcine, frat-rat kind of way, which is exactly what makes it the wrong spirit to invoke in an advertisement for alcohol.  Why didn’t Corporate see this immediately?  What adolescents are writing this shit, and which dim bulbs in marketing approved it?

Even if the guy doesn’t look exactly like a drunken dolt, and the girl doesn’t look especially terrified, it’s in extremely poor taste.  On the plus side, it’s an ad for vodka, not Ambien or other date rape drug.

The same theme could have been used without invoking rape.  Picture a guy and gal divided by a table with clear drinks in crystal before them, the guy obviously on the make, the girl resisting.  (I think this still goes one, doesn’t it? )  “Unlike some deals, Belvedere goes down smoothly.”

The other move in this thought experiment — suppose the roles were reversed?  Suppose the drunken aggressor in the ad had been female, groping some shy, frightened guy (I hear there are such creatures, if rarely spotted).  Would the outrage have been as vocal?

If you start from the premise, which I firmly believe, that the world would be a happier place if more people got drunk and had sex more often, then this ad, as tasteless and inappropriate as it is, recedes in significance.  No, they shouldn’t have run it.  Bee Eff Dee that they did.  It needed tweaking, is all — it should have depicted fun, not force.

5 Responses to A Tasteless Ad for a Tasteless Drink