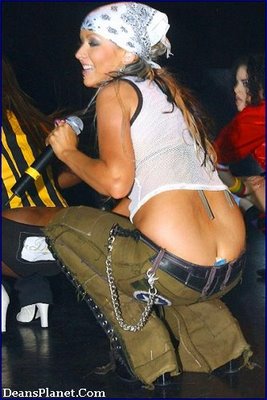 Drop that ordinance — and your pants if you consider it fashionable, Palm Beach County Judge Laura Johnson ruled Wednesday.  The judge overturned Riviera Beach’s saggy pants ordinance, which had prohibited anyone from wearing pants below the waist exposing skin or underwear.

A referendum endorsing the ban was supported by 72 percent of city voters in March 2008. Riviera Beach began enforcing the ordinance in July, but it was ruled unconstitutional by Johnson, city spokeswoman Rose Anne Brown said. — Miami Hurled

a)  Anybody, let alone almost ¾ of the voting population, could care enough about the way people wear their pants that this law ever saw the light of day.

b)  Not one single conservative commentator screams about liberal activist judges defying the will of the people.

c)  Legislators honestly believed that the U.S. Constitution would be silent on a topic as pressing to national security as the way kids wear their pants.

d)  Anybody at all, even a teenage male, would wear their pants like this to begin with.

e)  In a community where every day on the beach anybody can see more bare ass than a toilet seat, the sight of protruding boxer shorts could spark outrage and disgust sufficient to create this ordinance.

I wonder where I can get a pair of American flag underpants so we can start this parade of fools afresh.  Or maybe that read “If You Can Read This, I Feel Free.”   The Revolution continues!

Have a great weekend, everybody.