The day was as long and hard as a dinosaur’s dick, but the computer is on so I scan the blogs to see what’s happening.  I venture over to Rick’s, as I always do, and he has a link to this.  Worst pizza, eh?

As a pizza freak, I’m curious.  Pizzas got me laid.  Pizzas got me married.  I’m from Philly, where pizza grows on the original cobblestones laid by Billy Penn’s Eye-Tie contractors back in the 17th century (union labor, time and a half on Blue Law Sunday….you gotta problem widdat?).  The last thing I am is a foodie, but I know a fuckin thing or two about pizza. 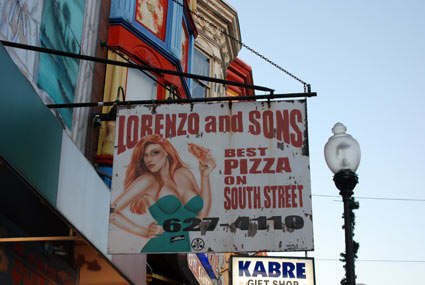 That’s what separates me from worstpizza.com.  This guy thinks pizza is something you eat with chopsticks and dry wine.  This guy eats pizza in a suit and tie.  This guy goes to pizza joints with air conditioning, shiny dark wood counters, and potted ferns (hold the flies) in decorative origami hangers.

Hey I’m sure he’s a sweetheart of a guy without a bruise or blister on his bone, but that’s not what pizza is all about.  He reviews Key West pizza — hey, don’t eat pizza in KW, okay?  Unless you live there most of the year, and you MUST, don’t bother — and orders it with pineapple.  PINEAPPLE!!  Here’s the commandant Moses left off as too obvious:: Thou Shall Not Defile a Pizza with Anything Hawaiian.  I don’t give a sun-dried shit where you go, don’t eat a pizza with pineapple any more than you’d eat one with raisins, prunes, crab grass, or ortolan beaks.

Missing among the three whole reviews dedicated to Hollywood (FL) is Mauro’s Pizza, which serves a damn decent slice, flavorful, generous, and utterly without pretense or atmosphere.  Two slices, plain, with garlic, oregano, and hot peppers, and you got a $5 lunch.  He does manage to prance into Flikr Lite, possibly the most over-rated pizza dump in Florida, and fails to figure out it’s got Chicago roots so passes in the deep-dish.  That’s a Duh moment in itself.  Actually, the deep-dish isn’t all that good, but he’ll never know because he actually goes for the pineapple again.  Al Capone witnesses this, he shatters his skull with a baseball bat; if I’m there when it happens, I cheer the justice done and buy Big Al a 20 oz Old Style. 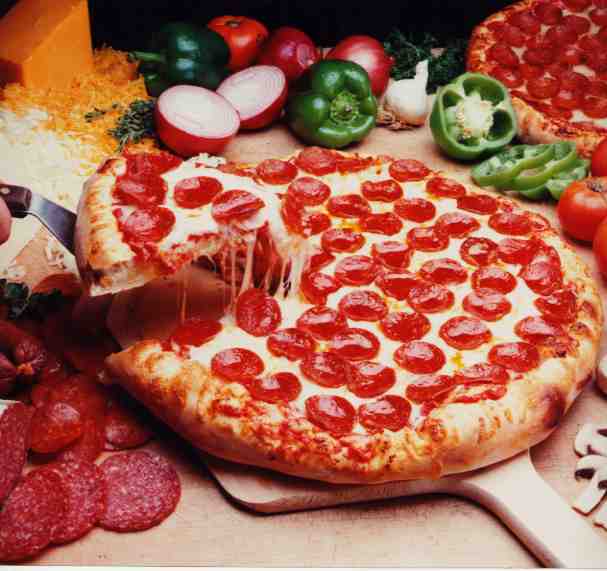 Oh, and in all the reviews, and all the cities, there’s not one devoted to Philadelphia, which without question has the best pizza as well as the most variety in the entire country.  That’s because the dagoid culture, which extends into south Jersey and the Philly suburbs, is the mainstream, so genuine pizza add-ons like fresh garlic, broccoli rabe, shellfish, roasted peppers, spinach, Italian sausage, mushrooms, etc., are understood, appreciated, and demanded.

Little mom and pop corner stores serve pizza to die for.  South Philly smells like a pizza oven 24/7.  The ovens and grills haven’t chilled down for generations.  (They haven’t been cleaned in a while, either!)  You crave hot pizza with a cold beer at 2 AM, and you devour the congealed greasy leftovers right out of the cardboard box cold from the icebox next morning with hot coffee.   The taste is divine, the world is right, and the evening and the morning are the next day.

That’s how you fuckin eat pizza, dickhead.  Put your pinkies back in your fists and drop the utensils.  You don’t know best pizza from worst pizza from no pizza.  Change the name of your blog to worstpizzareviewer.com.  And have a nice day.

15 Responses to Slice of Life