Note: For a more mature perspective on the following story, please go to Computer Colonics.

Britain’s largest clothing retailer, Marks & Spencer, has backed down on its incendiary policy of charging a 2 pound ($3) surcharge for bras that are DD or larger in the face of a spreading consumer revolt.

Think women don’t care about this issue? Then think again – that’s what M&S executives had to do after some 14,000 women gave their name to a Facebook campaign aimed at eliminating the big boob penalty.

“We always try to do the right thing by our customers and we thought we had, but it’s clear we’ve got it wrong this time,” said M&S chairman Stuart Rose. “From Saturday, no matter whether it’s large or small bras you need, the price will be the same.”  — Miami Hurled

Well, there goes my trip to England.  I was heading over for the protest rally: thousands of angry women, DD and larger, waving their fists and brandishing outsized lingerie.   But it looks like corporate punked out. 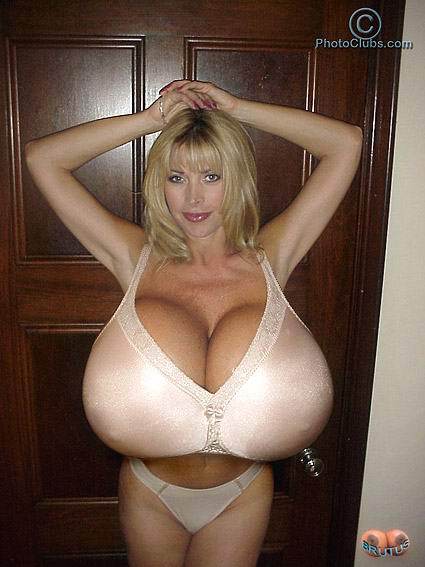 “Spoken like a true tit man,” Don Tequila tells me over the weekend, when I drop in at the Liquor and Rubber Balls Sports Bar and Autowash.  “But let’s check reality, okay?

“Look at material costs.  Other things being equal, a taller building costs more to construct than a shorter one.  A 3 pound lobster costs more than a 2 pounder.  The bar charges more for a quart than a pint.  You gotta figger it costs more to make a DD bra than a B, right?”

I’d have to some hands-on research, Don.

“You try it here you’ll lose your fingers,” he cautions me.  Wisely, too.  The largely lesbian clientele at LRB’s probably wouldn’t care to be groped, least of all by a man, and besides, I’ve noticed that bras aren’t all that popular an item here anyway.

“I got a story about that for you,” says a voice behind me.  I turn and see a woman I recognize as a regular, but don’t know.  Don Tequila, on the contrary, rolls his eyes.  “I’m sure you do, Cassandra,” he says, “but it won’t get you a beer, no matter how you bullshit.”

Cassandra waves that away.  “Back before my operation,” she says, “I was hung like a donkey.  In fact, I had to buy special underwear, and it cost me big time.”

I notice that Don stepped away at the word “donkey,” but Cassandra doesn’t seem to mind.

“In fact,” she says, “I figure I’m a candidate for the Big Dick Club.  So I go over there one afternoon to see what it takes to join….”

The “Big Dick Club?”  You mean, like a Gentleman’s Lounge or something?

“No, it’s a private club — bar, pool tables, sauna, reading room — very classy, I heard.  This was in Chicago.  Anyway I ring the bell at the visitor’s entrance and finally somebody in a uniform opens up, looks me up and down, asks me what I want.  I tell him I want to join.

Hell, I knew that crappy old joke — I just never heard anybody tell it in the first person, let alone a woman.  So I buy Cassandra a beer.  A tall one with a big foamy head.