But Baby it’s Cold Outside

I have an appointment in Duluth, MN in about 10 days, so I’m monitoring weather conditions.  I’m also soiling my underwear: 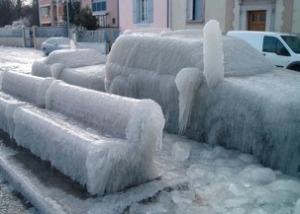 The jet stream hunkered to the south Wednesday, promising to bring nearly a week of temperatures that could dip to 20-below or worse in the northern midsection of the country, and forcing much of the rest of the nation to deal with unexpectedly cool temperatures. In Minnesota, the cold has forced Salvation Army bell ringers inside and cancelled holiday parties, while dense, cold air sunk into Rocky Mountain valleys and kept some lower elevations below freezing in the West….

Snowfall totals could also approach 3 feet in northeastern Minnesota, where the weather has contributed to hundreds of traffic accidents around the state, including at least four fatal crashes since Monday.  [via]

Ironically, the people I’m meeting are with the Salvation Army.  I can see us all in the same room — officers, board members, and banished bell ringers — huddled around a fire discussing 5-year plans as though life on earth would survive the season.  Every once in a while a bell rings, some coins drop in a kettle, and thanks are muttered.  At the end of the meeting we pool the cash and go out to buy something scalding hot to pour on our extremities.

“20 below or worse.”  Keep in mind that winter hasn’t even started yet.

I was in Minneapolis years ago when a major storm actually closed the Twin Cities for two days — a very rare event They told me).  Somebody up there dismissed the weather as “moderately cold,” and told me if I wanted to experience a real Midwestern winter, I should head upstate to Duluth.  “They tie 12-foot extending rods topped with bright red plastic balls to their car antennae so when they go around corners they can see around the snow drifts,” she giggled.   “Those people are plain crazy.”

Meanwhile, right outside her suburban house a gaggle of kids and adults had strung a net across the frozen street to play snow volleyball in the single-digit temperatures.

My plans are to fly into MSP airport, drive (or dogsled) 2.5 hours north to Duluth where I’ll spend the night, frostbitten and shivering.  Business should be complete by noon the next day, after which I’ll flee back to (balmy) MSP.  I can’t imagine there’s a lot of action in Duluth even when it isn’t buffeted by winds howling unimpeded across Lake Superior, and covered in Arctic ice, but even if there were, I don’t want to risk losing appendages to experience it.  Instead I’ll stroll through the streets of Minneapolis, enjoying the almost-double-digit temperatures.

I’ve spent time in upper state New York, northern new England, and Cleveland, but I’ve never experienced weather this cold, and in fact, I haven’t been in sub-freezing weather at all for several years.  I haven’t driven in snow for well over a decade.  I’ll let you know how it turns out.  I hope.

Here’s a video of “Baby It’s Cold Outside” with Lady Gaga and some dork.

2 Responses to But Baby it’s Cold Outside